50 Years of Law and Being Open to People, Places, Methods and Ideas

United around the theme of social justice, these discussions by the Open University’s legal academics examine controversial legal issues which have posed difficulties for law and society. Each post takes a critical look at the development of an area of law over the fifty years that the Open University has been in existence. Much has changed and is changing as we write: for example, the constitutional settlement between the nations of the UK, and the relationships between Europe and the UK.

Different understandings of gender, sexual offences, disability, equality, religion and race have changed the face of the law, as has increasing attention to human rights. The growth of judicial review has meant that the courts have had to carefully navigate the political/juridical divide. The creation of the Supreme Court has added a different dynamic, moving the most senior members of the judiciary from their traditional location within the political establishment. The courts have developed their jurisprudence against the background of challenging issues such as terrorism, the need to protect the environment, and ensuring fair treatment of those who are detained by the state.

Economic and social change has altered the nature of the legal profession and also the study of law. Professional legal training is about to be subject to radical change with the express aim of opening the profession to those from non-traditional backgrounds.

In the spirit of the Open University, we are opening our blog to people, places, methods and ideas. We welcome you to our blog and invite you to comment on our posts and start a discussion about our pieces throughout our celebration of the OU’s 50 years of existence. We hope you enjoy the read.

Posted in 50 Years of Law, Uncategorised | Leave a comment

Judging Brexit – What Would Llewellyn and Hart say about Miller 2

In our ongoing Judging Brexit series, our Research Fellow, Marjan Ajevski, has a talk with David Dennis, a Lecturer at the Law School, on what the early Realists would say about the Miler 2. The inspiration for the chat was David’s blog post on the UK’s Constitutional Law Association website, but we take it a bit further here with questions of law-making by courts and what constrains them.

If you prefer to listen rather than watch the talk, you can head over to our sister podcast Research @ OU Law School on SoundCloud, or just follow the link below. Please leave a question or a comment if you wish to continue the conversation further.

Judging Brexit – an ongoing series on things law and Brexit

The OU Law School is starting a series on Judging Brexit, where various academics from the Law School, and its sister faculty the Business School, have a conversation about all things legal and Brexit. Last week, Professor Simon Lee and Lecturer Simon Lavis had a chat about what the Supreme Court judgments mean for the UK’s constitutional arrangement, how to read Supreme Court judgments, and how referendums impact the constitutional settlement in the moment and over time.

These videos are primarily aimed at students of law but they are recorded with a broader audience in mind. They are there to inform and put recent events into the wider legal context. Brexit is a process; a process of re-shaping the law, of re-shaping politics, of re-shaping governance, and ultimately of re-shaping our identity as British, in our relation with the world and with each other.

And as a bonus, Prof. Simon Lee also has a chat with Dr Leslie Budd about some constitutional implications of Brexit and devolution.

In human effort, the only source of energy is desire.  It is not in a person’s nature to desire what he already has.  Desire is a tendency, the start of a movement towards something, towards a point from which one is absent[1].

As “informal” pathways, desire lines offer alternatives to existing ways within normative and usually highly planned spaces such as housing estates, town centres, or public parks.  The distinction may seem straightforward, but it is important to understand, precisely, what makes a pathway either “formal” or “informal”.  Two obvious examples of formal pathways, both of which are defined by the Highways Act 1980 are footways (pavements or sidewalks) and footpaths[2]. 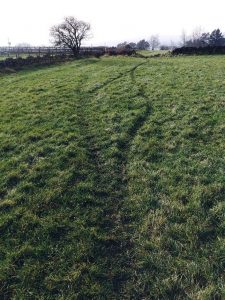 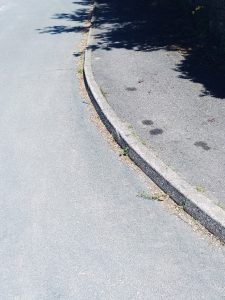 Of the two it might be argued that public footpaths, especially in the countryside, seem less planned than their asphalt counterparts, pavements.  Yet, both demonstrate human ingenuity in planning routes and journeys that inscribe the physical landscape, while creating rights of way that describe legal character within the landscape.  For good or ill, and like writing on a page, pathways tell stories of movement through traces that begin tentatively (informally) but inevitably become fixed and formal.  The formalization of pathways is described in law by the establishment of rights of way, usually ‘a period of use of 20 years from the point the use of the path is brought into question[3]. 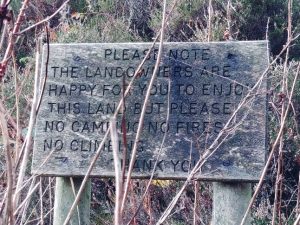 Establishing and importantly also formally recording rights of way, on an Ordnance Survey map for example, has long been important to ramblers and those who enjoy walking in the countryside.  Accurate knowledge of rights of way opens the countryside for exploration.  It would be too much of a distraction to talk in-depth here about property law.  But, worth briefly noting is that, whilst “property” is commonly thought of as a physical thing such as a car or a piece of land, the law regards it instead as a bundle of rights.   Among these rights is the right to exclude, which, in the context of land, means the right to stop people from entering (trespassing) or crossing privately owned land.  One of the reasons a right of way is significant, therefore, is because it represents a compromise between owners and non-owners within the context of a broader private property regime.  While the right to exclude absolutely might be preferable economically (it can secure and maintain land value for example, e.g. in cases of so-called “land-banking”), from the point of view of social and what we might also call spatial justice, including giving people a reasonable opportunity to explore and enjoy their environment, rights of way are an precious if limited sharing of space. 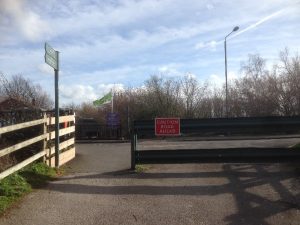 Wherever we turn in towns, cities and the countryside, we must negotiate planned spaces that, even when they might be thought of as “public” like a canal path for example, are in fact shaped by private ownership and the rights that ownership entail.  Formal pathways are just one example of how movement is governed and disciplined by planning rules and norms overseen by private property law and a variety of other regulations.  Signs and defensive architecture, like the barriers and fences in figure 4, in conjunction with pathways, channel movement and ensure walkers and other users of the pathways stay on the right path, so to speak.  Formal paths, in this sense, are thick with metaphor but, more importantly, reflect contemporary bureaucratic concerns to manage demands for efficiency and mitigate risk.  The aim is to ensure individual and collective movement that is controlled and predictable as far as possible.  Whilst the likelihood of injury or death to occur if the mix between cars and pedestrians is not planned for or managed properly suggests some bureaucracy is a good thing, the notion that one is not fully in control of where or how one moves through the landscape (the essence of being governed and disciplined) is more jarring to our sense of self.  For Michel Foucault, for example, the governance and discipline of movement is one element that produces ‘docile bodies’[4]. 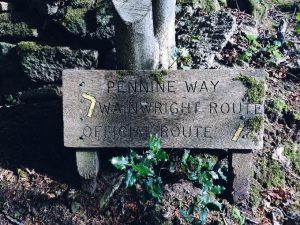 It is often useful to be told which way to go.  A well-worn path and clear signs that point the way make life easier, require less self-planning or initiative, and tend to make the experience of a journey less stressful.  Indeed, many of us probably accepted long ago, without even really noticing, a degree of complacency towards planned space that makes us easily annoyed when we lose the path.  Re-tracing your steps is time consuming and can take you in the wrong direction after all.  Through a bureaucratic lens, losing the pathway has a negative impact on efficiency, so more planning must be required. 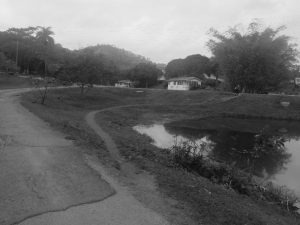 Leaving the beaten track may be romantic or fill us with a gratifying sense of mischief. As alternatives to the norm, desire lines are manifestations of a type of rejection of formality and thus also an attempt to reject the discipline that accompanies it.  Yet we all eventually fall back into line, return to the paths we are supposed to be on, don’t we?  Desire lines exist only to bring points of formality closer together, not to undo or destroy formality, or postpone it indefinitely.  When we stop to think about this of course, the very idea of leaving the beaten track, romantic or not, means nothing without having a beaten track to begin with.

Distinctions between formal and informal pathways are clearly made in law (and elsewhere). But what is formal is always already (in)formal.  Informality breeds formality, and informal ways, in turn, are re-found in formal, planned spaces.  All pathways intertwine to produce what Michel de Certeau calls ‘a rhetoric of walking’[5].  Desire lines today are poetics of longing in bureaucracy, maps of productivity and efficiency, configurations of advancing and overbearing economic motion that no fence can stop. 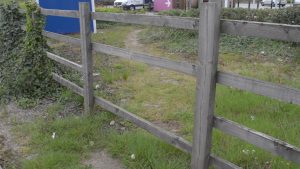 Rob and Lucy would also like to share a video with you that was shown as part of the Tate Modern’s Desire Lines exhibition. Hope you enjoy!

The desire lines project was started in November 2018 by Dr Robert Herian, senior lecturer in law at The Open University, with artist Lucy Atherton. The aim was to explore desire lines as indicators of cultural, political, economic, legal and social change through patterns of movement, as well as aesthetic and psycho-geographical phenomena.

The following presentation by Robert Herian and Lucy Atherton was recorded on 23rd may 2019 at Tate Modern, as part of the Tate Exchange programme. The presentation focused on one particular site: the immediate area surrounding the old Dema Glass factory in Chesterfield, Derbyshire. It incorporates local council planning documentation, bureaucratic theory, personal accounts and storytelling alongside photography, music and film, all of which provide different and critical perspectives on the informal pathways known as desire lines.

Finally, Rob recently recorded an episode on RUYA MAPS, an art platform with a global programme working with artists originating from areas affected by instability and conflict. Please have a listen to the episode:

* This blog is part of the project, Desire Lines, by Dr Robert Herian and the artist Lucy Atherton.  Don’t forget to see more of Lucy’s work.

Posted in Uncategorised | Leave a comment
This blog is protected by Spam Karma 2. Don't even think about spamming it.