This project started in 2013 as a collaboration between the ACI Lab and UK Charity Medical Detection Dogs (MDD), to address challenges faced by bio-detection dogs and their handlers. The project is ongoing, led by Dr Clara Mancini, with technical and research support by Robert Seaton and his team. Research Associates on the project have included Dr David Díaz Pardo de Vera (machine learning) and Dr Patrizia Paci (video data analysis).

Cancer Research UK estimates that one in two people in the UK will get cancer. Although common, some cancers (e.g. prostate cancer) are difficult to diagnose, with non-invasive tests being highly inaccurate (e.g. up to 75% false-positives for Prostate Specific Antigen blood test) and invasive tests causing serious side effects (e.g. cancer cell contamination) while still being inconclusive (e.g. up to 33% false negatives for needle biopsy). Therefore, there is growing interest in finding accurate, non-invasive tests for early cancer diagnosis. 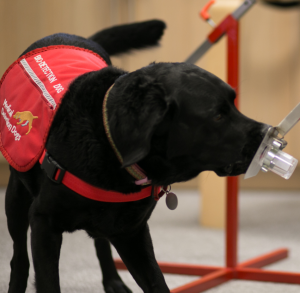 Dogs can be trained to recognise the odour of cancer cells in biological samples (e.g. urine, sweat, breath) and clinical trials are increasingly highlighting the potential of cancer detection with dogs, which has achieved reliability above 90%. However, the conventional signalling protocols the dogs are trained to use to communicate what they detect (e.g. sitting down in front of a positive sample) are inconsistent with their evolutionary response to odours of interest and only allow them to provide binary responses (‘yes’ or ‘no’). This interferes with and limits the potential of the dogs’ detection work. 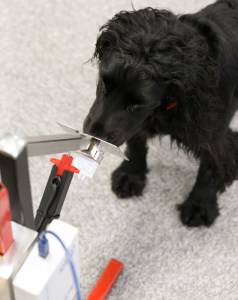 In collaboration with Medical Detection Dogs, world pioneer of bio-detection with dogs, at the ACI Lab we have developed a canine-centred interface to record and analyse dogs’ spontaneous interaction patterns with biological samples and infer diseased cell concentration levels. Enabling the dogs to spontaneously respond to the olfactory stimulus increases signalling reliability, and enabling them to provide nuanced responses increases signalling accuracy, possibly identifying different stages of the disease. 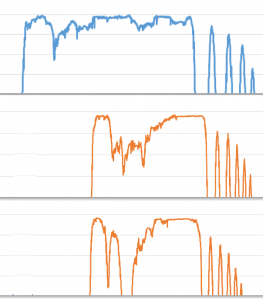 Our findings suggest a correlation between pressure patterns and odour concentration. For example, the three graphs shown here describe the interaction of a dog with three samples containing decreasing concentrations of amyl acetate. During the development of the canine interface we used amyl acetate to control the odour concentration in the samples screened by the dogs, which has allowed us to better study their interaction patterns with the samples. The data recorded via our canine interface also seems to identify false positives, when the dogs’ behavioural responses erroneously indicate a positive response.

Our early application of artificial neural networks (Multilayer Perceptron, MLP) to the classification task has yielded promising results, with the same classification rate for positive samples as the dogs’.