This project started in 2013 as a collaboration between the ACI Lab and UK Charity Dogs for Good, to address challenges faced by mobility assistance dogs and their assisted humans. The project is ongoing, led by Dr Clara Mancini. Luisa Ruge has conducted her doctoral research on the project since July 2018, supervised by Dr Mancini and Dr Rachael Luck. Elizabeth Cox joined the team as a visiting fellow later in the year and Dr Patrizia Paci joined as a research associate and lead coordinator on the project’s impact activities in January 2020. 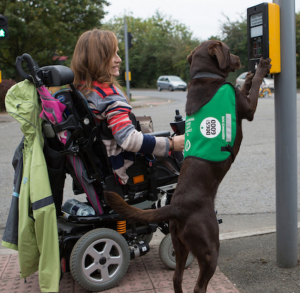 In spite of their fundamental social role, mobility assistance dogs have to operate in environments that are inconsistent with their evolutionary characteristics, facing challenges that for human workers would be deemed unacceptable. Training each dog takes several months and costs several thousand pounds, but 50% of dogs in training fail to qualify, resulting in investment losses for the charity, and those who qualify need to be retired around age 10, resulting in repeated emotional trauma for assisted humans and dogs alike. This has been attributed to the kind of equipment the dogs have to operate. 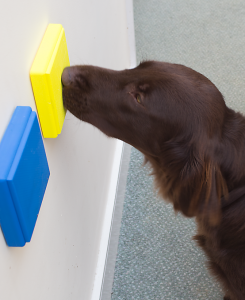 To improve the welfare, training and performance of mobility assistance dogs, we are collaborating with Dogs for Good to develop a range of production-ready wireless controls, whose design is consistent with the sensory, cognitive and physical characteristics of dogs, and that can be purchased and retrofitted to make domestic and public environments more accessible to mobility assistance dogs and their assisted humans. Our findings so far suggest that our prototype controls can significantly improve the dogs’ working conditions, training times and performance. 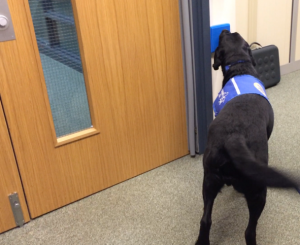 As a first form of in-the-wild evaluation, in 2015 we installed some of our prototype controls in one of the buildings on The Open University campus, to enable a PhD student and her mobility assistance dog to easily access and use the building. We installed controls to open the building’s security doors and to operate office lights. The controls are still in operation.

During her doctorate, Luisa has developed a new design for a wireless version of the controls, which have been tested by people who live with mobility assistance dogs and by Dogs for Good’s trainers. We have subsequently adapted the wireless controls for wider distribution to households with mobility assistance dogs and developed a wired version of the controls for the operation of automatic doors in public buildings.

In 2020, dog-human partnerships and representatives of Milton Keynes’ service providers and shopping centres attended a workshop we held to present our controls and promote their deployment across the community. More households have now used our wireless controls to allow the resident dogs to operate appliances such as lights or kettles, while the wired controls have been installed in a local restaurant to allow visiting dogs to operate the automatic door of the venue’s accessible toilet.

An important part of the project has been the development of new methods to elicit requirements for and evaluate the usability of canine interfaces and the canine users’ experience, as well as new multispecies interaction design concepts and frameworks.