This was the doctoral project of Patrizia Paci, between October 2015 and October 2019, supervised by Dr Clara Mancini and Prof Blaine Price.

Biotelemetry devices such as GPS collars are animal-borne electronic tags used by pet carers, wildlife researchers, and farmers for remotely track movements and measure vital parameters in animals. Although humans are the users of such technology, the tags are physically carried by animals which are exposed to physical, physiological and behavioural impacts. This is problematic both on ethical and scientific grounds, as the animal’s welfare is undermined and the validity of collected data is biased. Even the most common tracking collars sold on the pet market can cause adverse effects on animal wearers. 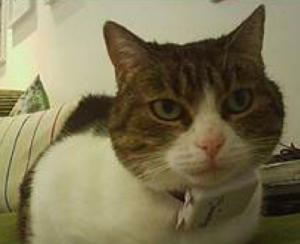 As a case in point, in an evaluation of two different off-the-shelf tracking collars, we observed 13 cats under three different randomised conditions: while they where wearing one or the other tracker and while they were wearing nothing. Our findings show that cats scratched and shook their heads and bodies more when wearing the devices than when not wearing anything.

The way in which they behaved during the observations also allowed us to find potential flaws in the design of the devices, and suggested implications as to which elements of the trackers could be re-designed to improve the wearability of these and other devices.

The aim of the project was to provide designers with a tool that would enable them to develop biotelemetry devices in a wearer-centred way and thus improve their wearability. The project delivered a wearer-centred design framework to establish requirements for designing animal wearables that are consistent with the needs of wearers. The framework was evaluated through design workshops and the redesign of animal wearables, highlighting significant wearability improvements against their off-the-shelf counterparts. The framework can be used to identify species-specific wearability requirements for new wearable devices, or to aid the analysis and refinement of requirements emerging from evaluation studies.

In our approach animal wearers are the main stakeholders in the biotelemetry design process, as we regard such a wearer-centred perspective essential to effectively improve the wearability of animal-borne tags and reduce device-induced effects.