This is the doctoral project of Fiona French, who started in July 2014, supervised by Dr Clara Mancini and Prof Helen Sharp.

The project investigates the potential for using technology to support the development of sensory and cognitive enrichment activities for captive elephants. It explores the usefulness of applying conceptual frameworks from interaction design and game design to the problem of developing species-specific smart toys that promote natural behaviours and provide stimulation. 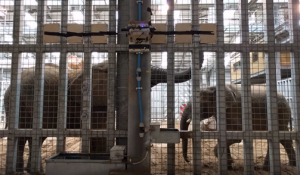 In particular, the research adopts a Research through Design approach to inform the scientific inquiry and design process, through the creation of artefacts that guide the exploration of possible future solutions. Along these lines, the fieldwork so far has resulted in the development of an interactive prototype of an acoustic toy that elephants are able to control using interface elements constructed from a range of natural materials.

More information is available on the project’s blog.