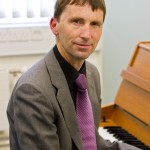 I volunteered to become ‘academic of the month’ for this second of our monthly blogs introducing members of the Music Department because February 2016 began with one of the most rewarding events I’ve been involved in as an academic for a long time. This was the first of what will be a series of pre-concert talks and other events which we are providing as part of the Department’s new partnership with The Orchestra of the Age of Enlightenment, launched at our Hidden Musicians Revisited conference in January. The OAE presented a programme including Schumann’s Violin Concerto, and I jumped at the chance to give a presentation talking about it. Partly because Schumann is one of my favourite composers, partly because the Violin Concerto is very rarely heard – in fact, I had never heard it even on record, let alone in concert before. 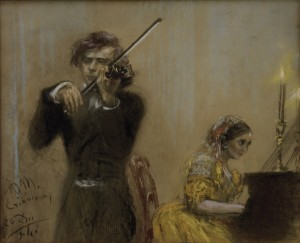 You would be forgiven for not knowing that Schumann had written the Violin Concerto at all. It was the last work he wrote using a full orchestra, and was finished in October 1853, just four months before Schumann’s mental health collapsed and he attempted suicide, then spending his last two and a half years in hospital. Finished just as the young Brahms arrived to visit the Schumanns (he stayed over a month), played through when they were joined by the violinist Joseph Joachim, the concerto was later suppressed by Clara Schumann and Brahms, who left it out of the complete edition of Schumann’s works, and lost. It ended up in a Prussian library filed under ‘Joachim’. 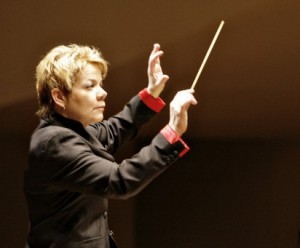 The pre-concert event took place at the Royal Festival Hall, and gave me the opportunity to meet Marin Alsop, the conductor of the concert, who shared the platform for the talk. It was fascinating to hear her describe the enthusiasm of the orchestra for this unsung work. Also taking part was Jessica Duchen, a journalist and author whose forthcoming, crowd-funded novel Ghost Variations tells the racy story of how the Violin Concerto was rediscovered in the 1930s: it was promoted by Hitler and Goebbels as a great German masterwork, which unsurprisingly did nothing to help its post-war popularity.

The other Schumann work in the concert was his ‘Rhenish’ Symphony, a work I know fairly well since I have recently been writing about it as part of the book I am currently finishing, comparing nineteenth-century symphonic composition with nineteenth-century novel writing. Apart from the chance to delve into well-known works like the ‘Rhenish’, writing the book has led me down all sorts of fascinating by-ways: for instance, the nearly-forgotten Vienna Symphony Competition of 1835, which I talked about at Hidden Musicians Revisited. One of my pet theories at present is that the English composer William Sterndale Bennett was a runner-up in this competition, but that his entry has been lost. Searching for this lost symphony led me this month to meet Barry Sterndale Bennett, who was giving a talk about his great-great-grandfather in Oxford, where most of Sterndale Bennett’s diaries, manuscripts and letters are now kept. Sadly, the missing symphony is not among them, so I shall have to keep looking for it elsewhere.