Would you be able to recognise the performers of a Beethoven symphony from just a couple of bars of a recording? That was a challenge issued during the course of a pre-concert panel discussion ‘has historically informed performance done its job? This event was held at the Royal Festival Hall on 14 February as part of the 30th birthday celebrations of the Orchestra of the Age of Enlightenment with involvement from the OU music department as part of our partnership with the orchestra. 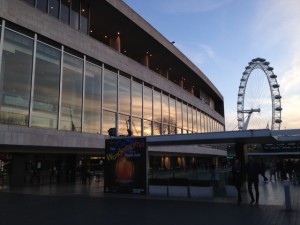 The panellists were Crispin Woodhead, the CEO of the orchestra, Kati Debretzeni violinist and leader of the orchestra, and Naomi Barker from the OU music department. Susannah Simons, one of the orchestra’s Board of Directors acted as moderator for the discussion, and started proceedings by asking the panellists to define what they saw as the ‘job’ that historically informed performance should be doing. All three panellists identified the organic emergence of the movement from what performers do with music of the past, and the strands of activity that developed from it. The audience was reminded of the many, now popular pieces, that had been forgotten and only rediscovered in the past 20 years or so, as well as the need to constantly ‘clear the cobwebs’ of past interpretations from what we do now. It was when the conversation moved on to what difference historically informed performance might make to an audience, that those attending were challenged to identify  a recording of one of the works to be performed in the concert, Beethoven’s Second symphony.  In this way, Toscanini’s 1939 performance of Beethoven became the launch pad for a lively discussion. Some important issues were raised about the ongoing job of historically informed performance, particularly for music of the 19th century and for music of much earlier periods.