I volunteered to be Academic of the month for March as I have been involved in some activities rather different from my usual routine, and that present some exciting opportunities for the future. Our MOOC https://www.futurelearn.com/courses/musical-scores, started its second presentation at the end of February, so I’ve been actively observing the developing online student community around it. I always enjoy reading comments from students who suddenly ‘get it’ and share their experience with others. Developing open access online courses is something that many institutions are doing, and experimenting with the possibilities of music being taught in this virtual environment is now part of the work of many academics. Unlike many subjects, music is something we do, so it is much more challenging to teach in the online world. 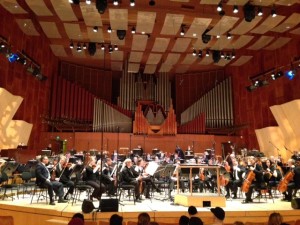 As I have been deeply involved in writing and developing the MOOC, I went to a conference on mapping online activities in music in higher education held at the Royal Danish Academy of Music at the beginning of March.  There are certainly some exciting new technologies being used by music conservatories to enable both teachers and students who travel extensively as performers to be able to continue working together. One session at the conference was dedicated to observing a teaching session where a cello student was at the Manhattan School of Music and his teacher was with us at the conference in Copenhagen. New low latency (LOLA) technology is also enabling musicians to play together from remote locations, and two demonstrations indicated some of the opportunities this technology offers, as well as some of its challenges, yet to be fully solved. A guitar quartet comprising two performers in London and two in Copenhagen was remarkably well balanced and synchronised. The performers, by directly facing a screen, a camera and a microphone were able to communicate effectively. 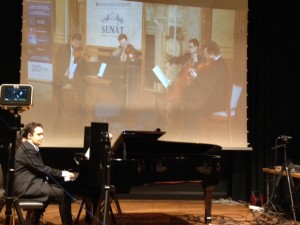 A less successful attempt was a performance of a Dvorak piano quintet in which the quartet were in Prague and the pianist in Copenhagen. The lack of direct eye contact, significant latency and microphone noise from the instruments all made this performance much more problematic. Less visually exciting, but no less interesting, were the developments in e-learning that were shared by participants in the conference, and discussions about the possibilities of new collaborations that may be enabled by new technologies.

Alongside my involvement in teaching activities and its challenges in the modern world, my research may seem very remote, as I specialize in Italian instrumental music of the late 16th and early 17th centuries, roughly from 1550-1650. I am particularly fascinated by the impact of printing technology and how music for instruments was written down (or not), how composers worked at the keyboard, and the social and cultural contexts in which they worked. My current research examines how keyboard music on the one hand developed from an unwritten practice, but on the other, in performance was often situated in meetings of learned aristocrats and scholars. I will be travelling to Rome later this year to visit some archives to investigate some intriguing clues about an organist employed to play in a hospital that had an organ in its wards. I have published several articles about how music was part of the vocabulary of the Accademia dei lincei, the early scientific academy of which Galileo was famously a member, and one of the earliest academic networks. The connections between what I was doing in Copenhagen conference and this 400 year old community are notable. They may not have had an internet, but what they were doing was cutting edge for its time, communicating new ideas in a specialised community.