Posted on November 9, 2016 by Robert Samuels 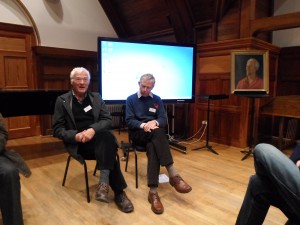 The composer’s sons, Benedict Rubbra and Adrian Yardley, with the RCM’s portrait of their father in the background.

A Study Day devoted to the music of British composer Edmund Rubbra, jointly organised by the Open University and the Royal College of Music, was held in London on Sunday 6 November.

The Inner Parry Room at the RCM was packed with virtually all of today’s scholars working on the music of Rubbra, who died in 1986.

The day was the idea of OU PhD student Lucy Cradduck, Rubbra’s son Adrian Yardley, and the RCM’s Director of Research, Richard Wistreich. The programme featured talks by two friends and colleagues of Rubbra, Lewis Foreman and Leo Black; composer and conductor John Pickard, who analysed Rubbra’s orchestral writing; and musicologists Lucy Cradduck, Jonathan Clinch, and Fiona Richards, who spoke about different aspects of Rubbra’s music, beliefs and influence. In addition, students from the RCM gave sparkling performances of some of Rubbra’s chamber works in a lunchtime concert. 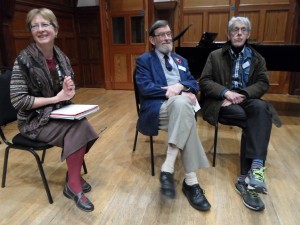 The day ended with a round table session where those who knew Rubbra shared their memories: Lewis Foreman, Leo Black and Adrian Yardley were joined by another son, the painter Benedict Rubbra (whose work can be found at http://www.benedictrubbra.co.uk/).

The success of the day demonstrates that Rubbra’s music is long overdue for more attention both from the academic world and from performers and audiences. It also marked another fruitful collaboration between the RCM and the OU, with both institutions keen to pursue future projects arising from their joint research interests.