Lecturer Naomi Barker has been awarded a British Academy/Leverhulme Small Research Grant and a Music and Letters Research Grant for her project on music at the Ospedale di Santo Spirito in Rome in the early seventeenth century. 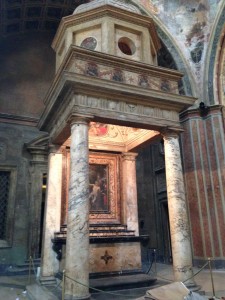 The chapel in the hospital ward of S. Spirito in Sassia

The Ospedale di Santo Spirito is unusual in that from the late 16th century it had a large organ situated in the hospital wards. Listed among the musicians who worked at the Ospedale and its church is the composer Girolamo Frescobaldi, but little is known of his activities there. The presence of music in a space built within a humanist aesthetic framework, and in which Galenic humoral medicine was practiced offers an unexplored context for musical practice.

Barker’s study will form part of a larger project which will break new ground in contextualising the keyboard music of Girolamo Frescobaldi within the wider cultural trends of the early seventeenth century. By focusing on the Ospedale di Santo Spirito, it will answer two questions: to what extent was music part of a wider programme of healing? and do the documented activities of musicians demonstrate patterns that support this or do they reflect other concerns?

Naomi is now looking forward to spending time in various Roman archives in the coming months and hopes to be able to disseminate early findings from her research later this year.