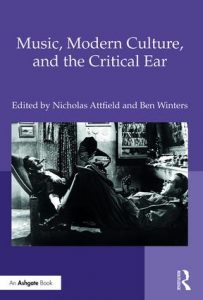 A new book co-edited by Ben Winters (with Nicholas Attfield) has just been published by Routledge. Entitled Music, Modern Culture, and the Critical Ear, it is a collection of essays in honour of Ben’s doctoral supervisor at Oxford, Prof. Peter Franklin. It features contributions by many of Peter’s former students and colleagues, and includes a tribute by Susan McClary.

The book returns to the challenge first outlined by Franklin in 1985 of how to best talk and write about the music of modern European culture that fell outside the modernist mainstream of Schoenberg, Berg, and Webern. Its chapters examine the music of Mahler, Strauss, Britten, Korngold, Pfitzner, Elgar, Satie and Herrmann, reflecting Franklin’s broad research interests. Ben’s own chapter is an expanded version of a paper he gave at a Department Research Day called “Korngold’s Violanta: Venice, carnival, and the masking of identities.”