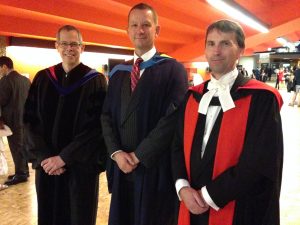 On September 22, Christian Day participated in the degree ceremonies at the Barbican Centre in London as the very first graduate of the new OU Bachelor of Arts (Hons) in Music programme.

Christian, originally from Shropshire but now living in Twickenham, started playing trombone and piano at the age of nine. After completing his GCSEs, he joined the Band of the Royal Air Force College and performed with their many and varied ensembles. In 2000, he joined the Prince of Wales’s Division (Clive) Band, performing with them for six years. A further six years with the Band of the Scots Guards in London preceded a three-year tour as Staff Piano Accompanist at the Royal Military School of Music. He returned to the Scots Guards Band in 2016.

Christian began studying with the Open University in 2011 because he was seeking a personal and professional challenge that would provide him with an educational benchmark for future employment. He is married to Joanne and has two adult children.

Byron Dueck is Senior Lecturer in Ethnomusicology and Head of Music at the Open University.
View all posts by Byron Dueck →
This entry was posted in Events, Teaching and tagged BA (Honours) Music, Byron Dueck, Christian Day, Robert Samuels. Bookmark the permalink.