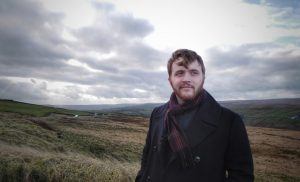 OU Music is delighted to announce the appointment of Dr Alexander Kolassa to the position of Lecturer in Music. Alex received his PhD in Music Composition at the University of Nottingham in 2015. Since then, he has taught composition and musicology at Nottingham and held an early career fellowship at the Institute of Musical Research. He has conducted opera in Mexico and composed music for ensembles up and down the country, both professional and amateur. His multimedia score for the immersive theatre piece The Memory Dealer contributed to it winning a Royal Television Award for digital innovation.

His research focusses on the intersections of musical modernism, medievalism, and popular culture in the concert hall, on stage, and on screen. He recently co-edited Recomposing the Past: Representations of Early Music on Stage and Screen (Routledge 2018), to which he contributed research on, among other things, music in Game of Thrones. His chapter on sound in the Russian film Hard to be a God appeared in Studies of Medievalism XXVII in May. He is currently developing a research project on medievalism and musical modernity.

Byron Dueck is Senior Lecturer in Ethnomusicology and Head of Music at the Open University.
View all posts by Byron Dueck →
This entry was posted in News and tagged Alexander Kolassa, Recomposing the Past, The Memory Dealer. Bookmark the permalink.