Catherine Tackley is an invited speaker at a conference on the ‘Global Circulations of Jazz’ taking place on 27-28 June at the Musée du Quai Branly in Paris. The event is co-organized by the Centre Européen de Sociologieet de Science Politique (CESSP) and the Centre d’Etudes de l’Indeet de l’Asie du Sud (CEIAS) at the L’Ecole des Haute Etudes de Sciences Sociales. Catherine will give a paper on ‘Race, Identity and the Meaning of Jazz in Britain, 1935-1948’, presenting some of her recent research on Benny Carter, the West Indian Dance Orchestra and West Indian jazz musicians in Britain during and after World War Two (which will form a chapter in a forthcoming volume on Black Music in Britain). The conference is open to the general public. 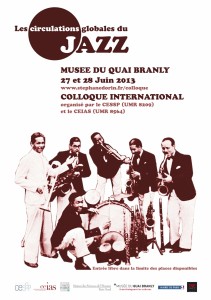