The Cultural Study of Music: A Critical Introduction 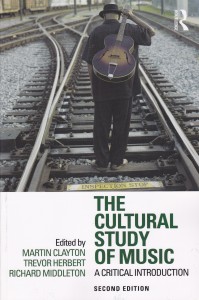 The second edition of The Cultural Study of Music has been published by Routledge. Now extended with contributions from thirty-five leading European and American academics, it has been described as a canonical text for the subject. It is edited by Professors Martin Clayton, Trevor Herbert and Richard Middleton, and originates in the Music and Cultures Group of the Open University, where, at the time of the first edition, each of the editors was based.