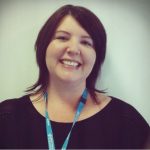 Jay Rixon is a Senior Manager in Access, Open and Cross-curricular Innovation and responsible for the MA or MSc Open qualification. In this post, Jay reflects on a staff-student online drop-in session titled ‘Four Famous Artworks – a creative discussion’ session held on Tuesday 16th June 2020. 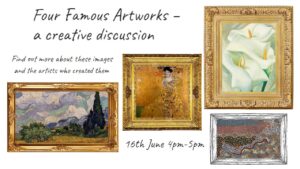 In our student and staff Open Programme drop-in sessions we have covered many a key topic such as music, books, films, TV, travel, pastimes/hobbies and food among other themes, and for this week’s session our spotlight landed on the world of art.

We chose to spend our Adobe Connect session focusing on four famous artworks: exploring the paintings, the artists who created them, and delving into the back story behind each piece.

We opened the session by having an interactive quiz exploring artworks by well-known artists that have sold for record-breaking figures. Often a painting’s price tag has much to do with the artist, the movement the artwork is defined by and the moment in history when the art was created. It is hard to assess the value of a picture simply by looking at it, without knowing more of its history or provenance. This recent article on the 20 most expensive paintings in the world is worth exploring for more information in this area:

The 20 Most Expensive Paintings In the World 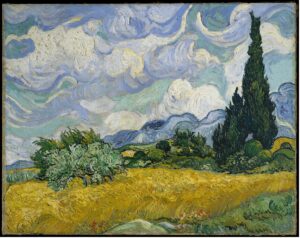 The first artwork we explored was Vincent Van Gogh’s Wheat Field with Cypresses (1889). This painting shows a large, ripe gold-coloured wheat field which is ready for harvest. The whirling clouds and blue mountains in the background complete this landscape. The feel of movement in the landscape is due to the painting method Van Gogh used called ‘impasto’, where paint is applied in thick chunky layers. I’ve seen many a Van Gogh picture in person and always loved the visible texture of the paintings, the feel of canvas that were painted ‘en plein air’ (in the open air), the excitement and passion with which they seem to have been produced and the colours. The Impressionist artists were the first ones to benefit from paint that came in easily transportable tubes and specific colours. Some paints, however, were lead-based, and apparently Van Gogh used to lick his paint brushes which we now know was not a good idea as lead paint is toxic and poisonous.

This pleasant and uplifting picture which has been used on many a museum postcard, printed tote bag and even jigsaw, belies the artist’s personal circumstances at the time of painting. The artist was in an asylum, near Saint-Remy. The institution was situated in beautiful countryside peppered with almond and cypress trees and surrounded by wheat fields. Van Gogh was allowed to paint in the countryside when accompanied by an asylum staff member. We discussed the well documented troubles of the artist who, in today’s terminology, had challenges with his mental health (we know that he cut off a portion of his own ear.)

Does this knowledge of the artist’s personal challenges give us more depth of feeling when we look at the picture, or do we romanticise the picture and the artist too much? Some session participants felt that the ‘tortured artist’ image of Van Gogh has been overdone and over played and others felt that the picture spoke for itself as a beautiful picture in its own right.

I shared with the group the feeling of seeing these artworks in the flesh, and we discussed the differences in viewing a painting on a screen or in print versus viewing them in a gallery where you truly see their size and the vividness of the colour scheme.

To learn more about Vincent Van Gogh and his amazing brother (Theo Van Gogh), this is an excellent short video all about the artist- Vincent Van Gogh: The Humble Genius More recently an amazing film about the artist was produced where they painted the film like the artist’s pictures. Each of the film’s 65,000 frames is an oil painting on canvas, created using the same techniques as Van Gogh by a team of 125 artists drawn from around the globe. The film was nominated for Best Animated Feature at the 90th Academy Awards, You might care to watch the trailer for the 2017 film Loving Vincent 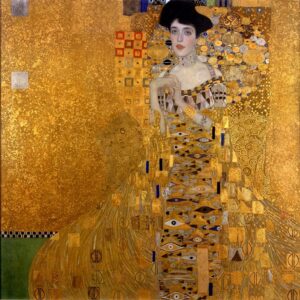 This painting, made at the height of Klimt’s career, is notable for the mix of naturalism, in the painting of the face and hands, and the ornamental decoration used for the dress, chair and background. Adele Bloch-Bauer possesses the rare distinction of being the only person Klimt ever painted twice. It took Klimt three years to create and was completed amid speculation that the Austrian artist and his high-society subject were lovers. Klimt’s father was a jeweller and the striking use of gold in his son’s paintings seems to carry on a family skill. Klimt ‘bejewels’ his image, along with the detailed shapes derived from Egyptian iconography.

Following Adele’s death in 1925 the painting remained in the Bloch-Bauer’s Vienna townhouse until the Nazis annexed Austria in 1938. Targeted amid the Nazis’ cultural looting spree, it was one of five Klimt paintings taken from the Bloch-Bauer residence post war, and in time the pictures ended up in Vienna’s Belvedere Gallery. Ferdinand Bloch-Bauer designated the paintings to be the property of his nephew and nieces, one of which was Maria Altmann. The Austrian government retained ownership of the painting and it was not returned to the Altmann family until 2006 after a long court battle. The painting was then sold at auction for $135 million dollars, which at that time was the highest price paid at auction for a painting.

The painting itself is a fascinating example of Viennese Secessionism, depicting the ‘golden age’ of that art movement, but the picture’s back story adds to its mystery and charm and no doubt financial value. Some session participants had never heard of the artist nor were aware of the background to the image such as the artist’s use of images borrowed from Egyptian motifs. To discover more about Gustav Klimt here is a short documentary on the artist- Gustav Klimt: Life of an Artist

An interesting documentary on this picture, nicknamed the ‘Lady in Gold, is available to view on YouTube called the ‘Art of the Heist: The Lady in Gold’. This story sounds like a film, and so they made it into one with Helen Mirren playing the niece of Bloch-Bauer, Maria Altmann, who believed that the painting was her legal inheritance – watch the trailer for the film ‘Woman in Gold’. 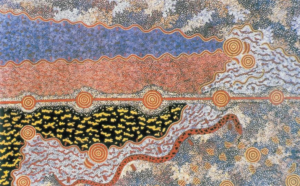 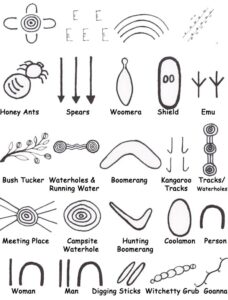 Image of Aboriginal symbols and their meanings

Our third painting was Possum Dreaming by Michael Nelson Tjakamarra (1985).  Aboriginal art eschews written language and uses symbols and icons that have wider meaning. Traditional aboriginal dot paintings represent a story, generally regarding hunting or food gathering and usually have traditional aboriginal symbols embedded throughout the painting. These symbols, when explained, give a completely whole new meaning to the painting. Colours used in the art works are meaningful as well, with natural shades being used to reflect the landscape they represent such as reds from local materials and ochre from iron clay. Yellow, white and black are also key colours in this art movement.

One session participant shared how she visited Alice Springs and had the chance to speak to local painters producing this artwork, and how the art and the experience of talking to the artist is equally of value to her. 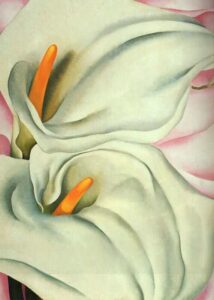 Our fourth and final artwork was Calla Lilies (1928) by Georgia O’Keeffe who is well known for her large, vivid flower paintings.  This painting depicts two calla lilies, made of broad, sweeping waves of subtly blended hues. The artist once remarked, “What is my experience of the flower if not colour?”

O’Keeffe’s 2,000-plus works mainly featured landscapes, bones, rocks, shells, and leaves. She experimented with perspective by painting large close-ups of flowers. O’Keeffe, who was familiar with the photographs of Alfred Stieglitz, Edward Steichen, Paul Strand, and Charles Sheeler, was intrigued by the aesthetics of photography and adopted the compositional device of isolating certain details and magnifying close-up angles.

A few session participants recalled seeing O’Keeffe’s work in a gallery setting, sharing how large scale the work is, how bright and bold the colours are and just how powerful these pictures are when viewed first-hand. Her unique style was a combination of the abstract and realistic. Georgia O’Keeffe is one of the most significant artists of the 20th century. She made a place for herself in the male dominated art world. This is how she described herself, “Men put me down as the best woman painter…I think I’m one of the best painters.”

This drop-in session was such a pleasure to be a part of: the chance to focus on four pieces of art and their artists, to discuss and debate their merits, and debunk the hype around them. This event was a good example of how these student and staff drop-in sessions have been such a good and positive thing to come out of this time of lockdown.  When else would we have found ourselves virtually disagreeing about Van Gogh, discussing Viennese Secessionism and introducing people to O’Keeffe on a Tuesday afternoon in June?

This is the power of learning, the pleasure of it, and art is such a meaningful topic to explore, even if we disagreed over that meaning, and had different favourite pieces.  For the short time we were together it made us part of a community and like much of the art we discussed, that is priceless.