Sci-Hub is a hot topic.

Billed as “the first website in the world to provide mass & public access to research papers”, it works by harvesting academic journal articles that usually have to be paid for and making them freely available. However, these articles are subject to copyright and the legality of the operation is under contention.

Many of Sci-Hub’s users are vocal fans: 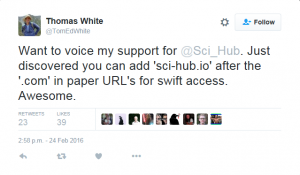 However, Elsevier believes the site is unlawful and filed a lawsuit against it. Sci-Hub’s founder, Alexandra Elbakyan, has defended her creation. In a letter of response to Elsevier’s legal action, she states that articles are overpriced and current subscription systems mean many researchers cannot access vital papers, especially in developing countries. She has also argued that Elsevier’s own business practices are illegal.

Ernesto Priego believes the issues around Sci-Hub are complex. He feels the service is indicative of people’s dissatisfaction with the status quo and the lack of progress made by what might be called the ‘traditional’ Open Access movement but feels Sci-Hub is unlikely to offer a long-term solution to problems with the academic publishing system and does not change its underlying culture.

However, Elbakyan disagrees with his assertions strongly. She states  that Sci-Hub is in fact a genuine, long-term solution to the problem of accessing journal articles and the only solution available to many people. Björn Brembs follows up supportively, reinforcing the view that Sci-Hub is necessary and highly effective.

Corinne Ruff describes how many academic librarians feel trapped between supporting Open Access and patronising publishers. This same article uncovers concerns amongst some that Sci-Hub operates a phishing scam in order to get the usernames and passwords it needs to access journal databases but Elbakyan has denied this.

Many are still torn regarding whether they can support Sci-Hub and, in spite of her public statements, some discussion regarding Elbakyan’s motives continues.

What is certain is that Sci-Hub is one of the most significant developments in scholarly publishing of late and will continue to trigger debate. How do you feel about it?

1 thought on “Sci-Hub: the debate continues”