The impact of engaging with social media in conjunction with Open Access papers in a repository is not new and was perhaps first illustrated by Melissa Terras back in 2012 in her blog post Is blogging and tweeting about research papers worth it? The Verdict where she writes:

“The papers that were tweeted and blogged had at least more than 11 times the number of downloads than their sibling paper which was left to its own devices in the institutional repository. QED, my friends. QED.”

The top 50 downloads from August are listed below:

The first output that interested me was at Number 6: Ferguson, Rebecca; Coughlan, Tim and Herodotou, Christothea (2016). MOOCS: What The Open University research tells us. Institute of Educational Technology, The Open University, Milton Keynes.  This received 305 downloads and had only been added to the repository on the 12th August this year.  First analysis revealed that 12% of referrals in August were from Twitter and another 12% from Facebook (33% were internal ORO referrals and another 19% were from Google).  So something had happened on Twitter and Facebook that helped cause a spike in downloads of the item.

So, the first trace of twitter activity was from Rebecca Ferguson (@R3beccaF) herself on 12th August:

This was followed by another tweet by Gabriel Dumouchel (@gdumouchel) on the 18th August: 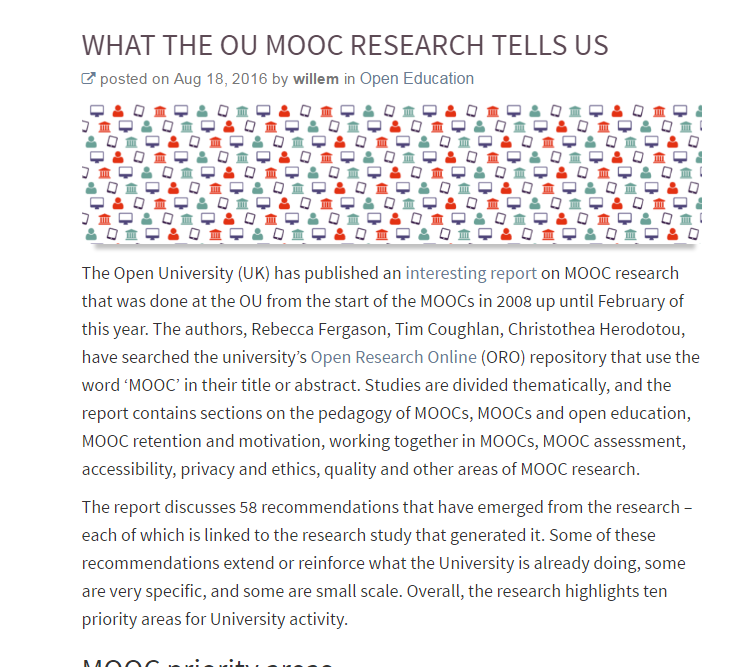 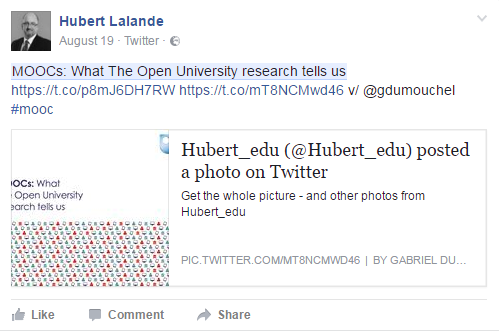 Finally, there was a tweet on 13th September by MOOC Knowledge (@MOOCknow):

#MOOCs: What the @OpenUniversity #Research Tells Us https://t.co/Z63211uZc3 #report #OU via @R3beccaF 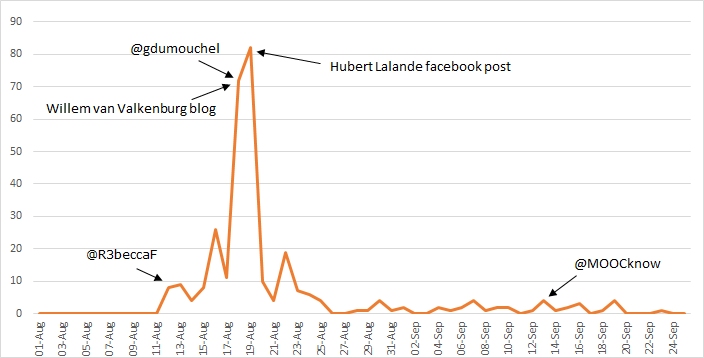 The second item to grab my attention was at Number 12: Gray, Joshua; Franqueira, Virginia N. L. and Yu, Yijun (2016). Forensically-Sound Analysis of Security Risks of using Local Password Managers. In: 1st International Workshop on Requirements Engineering for Investigating and Countering Crime, 13 September 2016, Beijing, IEEE. This had been added to ORO on the 26th July and received 200 downloads during August.  The referrals were even more intriguing as nearly half (48%) were from Twitter (a further 18% were internal and 11% were from Google)… so to the twitter trail.

On 13th August the ORO record was tweeted by K.M.Gallagher (@ageis):

It was also posted on EventRegistry on 23rd August:

Finally, it was tweeted by the conference organiser (@iRENIC_workshop) as Best Long paper (but with no link!)

and if you map all that activity onto the daily downloads this is what you get: 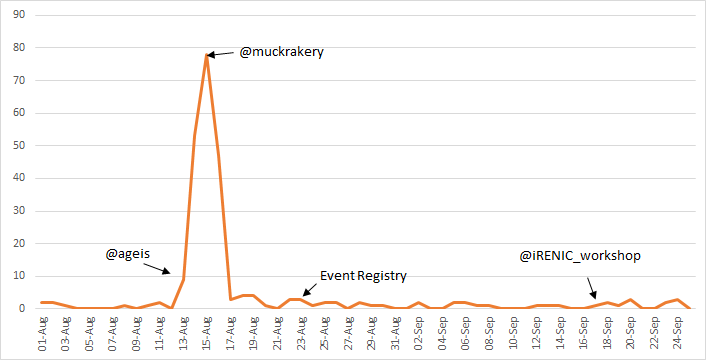 OK, so my trawl through the social media isn’t exhaustive – I’m sure there are activities I’ve missed, but I think it’s still instructive:

Finally, looking at the tweets and posts I was struck at how those that had the most impact on downloads were also the most eye-catching.  These were tweets with photos of the abstract of the conference item or posts with the cover of the MOOC report.  The images certainly makes them stand out in the timeline and there is some thinking to suggest tweets with images and links are more likely to get noticed.