This paper discusses the experiences of children with learning difficulties during the Second World War. In particular, it looks at the role of teachers within the residential special schools set up to accommodate children evacuated from areas deemed vulnerable to air attack. Away from their families, often for the first time, these children relied heavily on their teachers for their safety and general welfare. 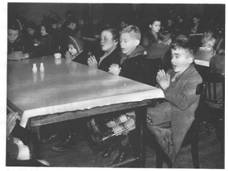 The paper also examines conditions within the premises used as residential special schools, most of which were not set up to house large groups of children. These included hotels, stately homes and camps; the latter being especially problematic during the winter months.

The attitudes of people towards the children will be discussed. This not only includes teachers but also camp managers, government officials and members of the general public. Finally, in order to place the children's experiences in perspective, the paper will compare the lives and wartime conditions of children with mental health problems with those with physical and/or sensory disabilities.