Whyteleafe House was the same as St Lawrence's, the only difference is that it was a house. It was still a big place. It was no different because they still had nurses and what-have-you. You still had 50 people. It was all women. I shared a room with six others.

The hospital used to bring me in the car and they used to take me back to Whyteleafe in the car. I lived at Whyteleafe House, they used to pick me up at the house and take me to the hospital for the day. At night time they used to take me back. I never went on the bus that we go on now. If you didn't go out, like me and a few of them, you still had to wait for someone to go with you. Eventually I just said could I go and try myself and they said I could. I went by myself but they don't like it.

I was about 31 when I went to Whyteleafe House. I've been out of St Lawrence's 20 years now. I asked to leave. My friend, Eva, she wrote and asked. She said I might be able to cope a bit. She got in touch with the social worker what used to be in the hospital. If you wanted to go to work or anything then they would just get in contact with one of the social workers.

First impressions of the outside world

When I first came out of there I thought the children were midgets. People have laughed because they said to me, "Was that the difficultist part of coming out of there and finding children are midgets?". I never saw children, only children in wheelchairs and what-have-you, not children running about and doing all the things they're doing. So really the children fascinated me, seeing them it really did fascinate me.

I'd never been on a bus or on a train. Because you never went. These are all the things you didn't do. It's not like ordinary people going out and doing what they want to do. In them places, you didn't. So going on a train or going on the underground all them are new to me. In fact going on the underground and on the moving stairs and all that is quite new to me. I'm used to the bus now because I go so much. I don't have to buy a ticket, I've got a pass.

Early days in the community

I lived with a family in Caterham Valley but she used to keep having nervous breakdowns. She used to be ever so funny. And then, because there was nobody in the house when I went home one day, I got frightened and ran off. I went to Eva's house but I couldn't stay there so Eva phoned up and I went in where I worked, at the old people's home. I lived there, stayed there. I used to help look after the old people in Caterham. I used to help them do the cleaning. I lived there for a little while, and then they said, "Oh, you can't live here anymore". They said, "You know, it's not really for you".

So I went to live with another lady, she had a Down's syndrome boy. A social worker, a man, decided this, but that was only supposed to have been for a short time. It was at Old Lodge Lane. I was there for a year and a half, then I went to Isabel's. I went because the other lady only wanted someone to play with her little boy and I didn't want to do that, not really. I don't want to keep somebody company.

When I first went to Isabel's she found me a morning job but they were again being a bit difficult because Isabel had to keep coming up and getting social workers to come and talk to them. I just gave it up. There was only me and Anne in the beginning at Isabel's. And then she said she was going to have another one, and she had Gloria. Then they started to get more and more and more, till there was 13 living there.

I had my own front door key at Isabel's and she made sure always that you had money in your pocket. I had my own room and since I'd been at Isabel's I'd got my own telly and my own tape recorder. I stayed at Isabel's six years and a half and I thought, well, now it's time for me to adventure a bit more. Gloria got like me, she asked to move out of Isabel's because there was too many, like I did, and she went to live with two sisters. 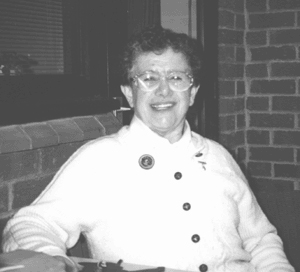 I thought it was time I adventured. I got friendly with a lady called Anne Evans, one of the boarding out ladies and a friend of Gloria's. I went to dinner one day with Gloria and Anne and I said to Anne 'Do you know I'm thinking of asking to move out of Isabel's? It's just too noisy'. There was 13 people then. I stayed as long as I thought I could stand it. And I said, right, this is enough, and I asked. I said to Anne, 'I am thinking of moving, definitely' and she said, 'Oh, leave it with me and I'll sort it out for you'. I went to a few places and I said no, and then I went to Mary's.