Mary is my carer now. She buys the clothes for me because I find that's difficult. Mary does it for me because my eyesight's not that brilliant and the writing's so small. I can't read the labels so Mary does it. Jean lives at Mary's, she's all right, she helped me write a letter last night. She can't walk very much but otherwise she's OK. So I've got Jean and I've got Mary, so there is people here.

Gloria lives in South Croydon with Norah. Norah is like Mary, a carer. So Gloria lives there and on Saturdays I go there to see her. We're good friends but I don't think I could live with Gloria. 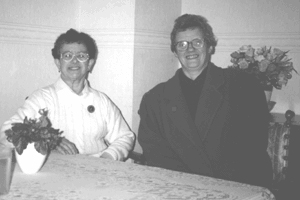 And I've got Flo, I've got quite a few friends what don't live, what hasn't been in hospital Ð but I've got some what have.

I go down the seaside, I go places. I just tell Mary I'm off and I go. Because when I first came out I had to learn to get on the bus and go to the places I want to do. I taught myself to go to Brighton. I had to. They showed me what train to get on. And then I didn't sit on the grass, I went to the fair because I like the fair. That was new to me as well. I even go to Margate. You have to go to Victoria and get a train from Victoria.

I joined People First several years ago, when Isabel asked me would I like to join. There were about ten people when it first started in Croydon, now there's loads. I didn't join in very much at the first time or for a couple of weeks, something like that. Then one of the men what was chair person, he didn't turn up so they asked me would I take it on. So I said, 'Oh, all right, I'll take it on for one week'. And one week got more weeks than ever. This was years ago.

Because of being in the People First Group I went to Canada. That was the biggest conference yet, that was bigger than Mencap put together. That was good, Canada is one of the good ones. But I think I would have liked somebody else to come because it would have been more exciting with somebody else. Declan said it would have been nice for somebody else from Croydon to come as well. I used to do a few jobs for Declan, like going out talking to people, and help tidying their office, and doing all the little jobs they needed to do on a Monday. Declan used to pay me and kept the money for me, so it paid for my trips and what-have-you.

I used to work with a group who were coming out in the community. Me and another fellow used to do that, two days for three months. Two days every week, for three months. We also used to go into one of the day centres in London but a lot of people, they don't understand. One of them we had to ask could they go out because she was making so much noise. But I said to them, 'You know, she must be allowed to come back again', I said, 'because she's out this time she mustn't stay out, she must come back and join in'. They said, 'Could the carers come in?' and I said, 'No, not carers, just the people what's got the learning difficulty', I said 'otherwise they're not going to talk'. So no carers. They talked about different things, they want more money to go to day centres.