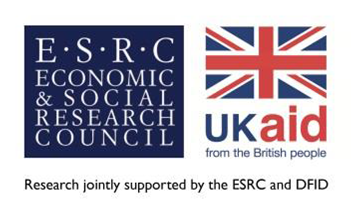 Funding is gratefully acknowledged from the Economic and Social Research Council, UK and the Department for International Development, UK, under the DFID-ESRC Growth Programme project ES/M004066/1. All content on this page is the sole responsibility of the project investigators.

Much of the growth rate of African economies – currently among the fastest in the world –  is based on the export of commodities such as oil to China and other emerging economies.

Chinese National Oil Companies and the Economic Development of African Oil Producers, a collaboration between the OU and the Centre for Energy, Petroleum and Mineral Law and Policy (CEPMLP) at the University of Dundee, explores the interaction between China’s oil interests and African state and non-state actors in three African countries: Ghana, Nigeria and Sudan. Its main aim is to assess whether policies can help to maximise the benefits to Africa’s development.

While the research is interested in the methods of operation of Chinese National Oil Companies (NOCs), it wants to move away from a crude ‘impact of China on Africa’ focus to a more holistic analysis which takes account of African impact. This includes both the drivers of China’s presence in the African oil and gas sector and the economic and political determinants of Africa’s response. There are four themes of research:

Data sets on Chinese FDI and African social indicators will be collated along with interviews from key Chinese and African actors. This will offer a detailed understanding of the different motivations, roles, and impacts of Chinese NOCs and the role played by Africa in shaping this engagement. It will also provide an understanding of changing oil sector dynamics in Africa and their impacts on African economies.

Party School of the Central Committee of CPC

The workshop allowed the exchange of knowledge with industry practitioners from China's oil industry as well as with researchers closely allied to these oil companies such as academic geologists.

Dr Erica Downs' keynote speech, 'China’s Overseas Oil Investments: What Comes Next?' was open to Masters and PhD students from across the university and invites also went out to the wider Scottish oil network. A Special Issue of the Journal of Contemporary Chinese Affairs is planned as a result of the workshop.

Media: CNBC Africa
To coincide with the 2015 FOCAC meeting in Johannesburg, Professor Giles Mohan was invited to appear on CNBC Africa's TV programme 'Beyond Markets'.

Mohan, G (2016). Chaired The China Effect, a panel discussion around how NGOs might engage with China as an international development actor at the BOND conference held in Westminster 29 February - 1 March 2016.

Mohan, G (2015). Discussant & presentation at a policy workshop held in December in Johannesburg, ahead of the 2015 FOCAC meeting.