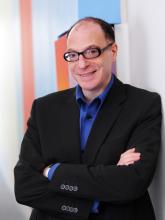 I joined The Open University in 2007 because I knew that the Faculty of Social Sciences at the OU has an international reputation for undertaking innovative and critical research and teaching. It has been at the forefront of developments in critical social science with renowned professors such as Doreen Massey, Jef Huysmans, John Allen, John Clarke, Margaret Wetherell, Michael Saward, Sophie Watson, Steve Pile, Stuart Hall and Tony Bennett.

Working together in collaborative research and teaching is the OU’s signature and it is the single most important contributing factor to my research.

My PhD dissertation, which became my first book, Cities Without Citizens, looked at how colonial subjects who fled the American Revolution struggled for political rights in Canada. This struggle became the leitmotif of my subsequent research: how do people make claims to rights? I also had personally a chequered history of citizenship, alternating between statelessness and multiple citizenships. This history may have had something to do with my quest to understand how people understand (or fail to understand) themselves as political subjects, i.e., claimants of rights.

My two main large grants were ENACT, a Framework Seven project between 2008 and 2011 (€1.1M) and Oecumene, a European Research Council Advanced Grant between 2010 and 2014 €2M). Both projects allowed me to work with large-scale collaborative research groups.

Whereas some 20 years ago ‘citizenship studies’ hardly existed as a field of research and teaching, but today it is amongst the most respected and recognized fields in social sciences and humanities. This impacts on how states not only in Europe and America but also in other continents negotiate terms with their citizens. Similarly, the field of citizenship studies made a significant impact on how human rights came to be expanded to include many rights that were considered as citizenship rights and thus contributing to the emergence of international institutions regulating the relationship between states and their citizens such as the European Union and the Council of Europe.

Professor Engin Isin holds a Chair in Citizenship and is Professor of Politics in Politics and International Studies (POLIS) at the Faculty of  Arts and Social Sciences, The Open University. Learn more about his research.

Engin Isin is Professor of Citizenship in the Faculty of Arts and Social Sciences.