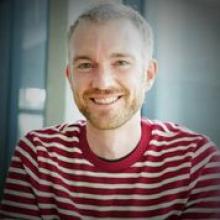 I joined the OU in July 2009 because I was impressed by the “openness” of the university and excited to be part of a team that can work with broader audiences than those traditional universities can reach. Initially I was chair of the Classical Studies MA, but for the past two years I have been on research leave in Berlin, funded by the Alexander von Humboldt Foundation. The OU’s dedication to teaching is clear from its public profile on the Web and TV, from the work each module team puts into producing content, and from the satisfaction ratings that the students give the university; less well established, I think, is the OU’s research culture. But right from the beginning I was encouraged to pursue my research interests, which has involved working with colleagues from across the OU on topics like Digital Humanities and Mobile Learning, as well as collaborating with external partners on projects funded by the AHRC, Google, JISC and now the Andrew W. Mellon Foundation.

My entry into the worlds of ancient Greece and Rome was rather unconventional. Since I went to a state comprehensive school, Greek and Latin classes were not part of my formal curriculum. Instead I encountered both cultures through their stories: specifically, Homer’s Iliad and Odyssey, retold as “Odysseus: the Greatest Hero of them all”, narrated by Blackadder’s very own Tony Robinson. Captivated by the life-and-death struggles of war and the rollercoaster voyages of discovery, I studied Classical Civilisation at the University of Leeds, followed by an MA in Greek Civilisation and a further MA in Greek and Latin at Ohio State (in the US). With a better grasp of the languages under my belt, I returned to the UK to study a PhD at Pembroke College, Cambridge. Before joining the OU, I taught at various universities (Bristol, Nottingham and Reading), but largely at Christ Church, Oxford.

My current research at the OU explores the use of digital technology to examine the cultural geography of the ancient world. Places mean much more than dots on a map. They fall and rise; they belong to various kinds of networks; in short, each place has a life history bound up in the stories told about it. To allow these stories to be told, we need to combine different online resources—text and image, literature and the material record. Fortunately, you don’t have to be an IT expert to work in the digital world! I now commonly work as part of an interdisciplinary team, where everyone has different skills to bring to the mix. Collaboration is a lot of fun. Best of all, our work is all about making information more open - the core ethos of the OU.

How will my research change the world? That’s a big one! I think that enabling data to be linked together on the Web has massive potential.

Primarily I hope that it will help people to think for themselves and encourage them to question where they come from. The classical world might seem self-contained, but the more we research it, the more we see how much it still has to offer on questions of individual identity and social relations.

Dr Elton Barker is a Reader in Classical Studies in the Faculty of Arts.