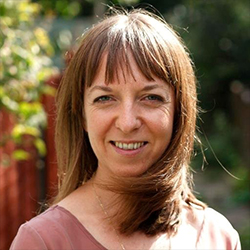 I thought the OU would be the perfect place to do my PhD because of all of the research generated there and I knew my supervisors would be great mentors. So then, 10 years after I did a Master’s degree in Creative Writing at the University of East Anglia, I decided to come back into education as a student again.

At this point, I got to a stage with my own writing where I found that I was getting short stories and journalistic pieces published but I wasn’t getting any of my books published – it felt a bit like I was writing in the wilderness. I’d had an idea for a novel about learning disability and was having to do a lot of research in order to write the novel. I thought that this would be a good subject for a PhD. I was also at a stage where I felt like I needed some support for my own writing because I was giving a lot of support to my own students but felt like I needed some help as well.

With creating writing PhD’s we submit a novel and we also submit an accompanying thesis. My research title was If I Could Read Your Mind: how fiction can give voice to the unrecorded lives of those with profound learning disabilities. As a creative writer I felt like part of my role was to push the boundaries of what an academic thesis could be, to try to make it something that was compelling and engaging to read and to make the language valuable in itself as well as the findings.

The novel that was submitted alongside the thesis, Owl Song at Dawn, was published by Legend Press on 1 July 2016. The PhD really led to the publication in part because I had such immensely helpful advice from supervisors.

I thought the OU would be the perfect place to do my PhD because of all of the research generated there and I knew my supervisors would be great mentors.

I think I got a lot from being part of an organisation who’s raison d'être I believed in. It felt for me that the OU was there to fill a space in higher education that wasn’t being filled by anyone else. That’s why there are so many great learning disabilities studies that have been done at the OU, because it’s got a kind of progressive outlook and it really embraces that kind of research.

My parents both did their undergraduate degrees with the OU, but they were doing it in very different circumstances, so the OU has definitely played a crucial role in my family throughout the generations.

My advice to anyone studying with the OU would be to try to find a way of building a sense of community. This is something you might have to put more effort into than you would at some other universities. But there are lots of ways to do it. Sometimes it can feel overwhelming, but there is always a wealth of options, they’re just not the conventional options that we might usually have in traditional universities.