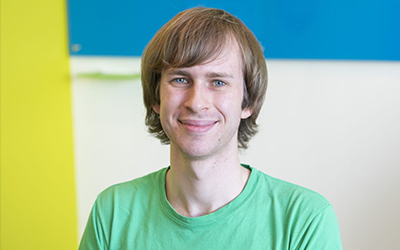 I went to school in Belfast and after passing my A Levels I took up a place at the University of Cambridge. My degree in natural sciences included physics, maths, chemistry and earth sciences. I really came to enjoy geology during my time at Cambridge and when I left I knew I wanted to continue studying it, so I started researching PhD topics and discovered via email that the School of Physical Sciences at the OU was looking for a doctoral candidate to carry out geological mapping of the planet Mercury. I had been interested in space from a very young age, so this was a perfect combination of two things that I had enjoyed studying: geology and space. Coming to the OU was really great.

My area of research in space science is planetary geology, although very specifically I am making a geological map of part of Mercury. My thesis title is ‘Geological mapping of the Hokusai quadrangle of Mercury’, which is just a part of the planet’s surface. My PhD is fully funded by a Research Council grant from the Science and Technology Facilities Council; that includes my tuition fees and stipend.

During the course of my first year I have been making the map and looking at certain features on the surface of Mercury. There is a cliff-like feature in my mapping area called a lobate scarp, where part of Mercury’s crust is thrust upon part of another, and the one in my area did not have a name. I was able to suggest a name for this feature to the International Astronomical Union and they accepted my suggestion at the end of January 2016, so that is something new that I have done. I forget about it every now and again because it is not strictly science in my view. I think it is more important to discover why this feature is important rather than giving it a name in the first place.

What gets me out of bed in the morning is knowing that I am producing something new, a map of a planet we do not know very much about, and in particular of an area that has not been looked at in any close detail by human beings until now.

If I were giving advice to someone who was considering PhD study, I would seriously advise them to take a look at the OU. I think part of the reason people might not apply to the OU is that it doesn’t get the same level of exposure as conventional universities. What people do not realise is that the OU, as far as a PhD student is concerned, is entirely conventional. There are buildings, a campus, academics who work on campus and PhD students do that as well.

What gets me out of bed in the morning is knowing that I am producing something new, a map of a planet we do not know very much about, and in particular of an area that has not been looked at in any close detail by human beings until now. Whenever I lose sight of why my work matters, I remember that we are pushing back the frontiers of human understanding and I become enthused about my research all over again. Some people go their entire lives without knowing Mercury exists and it does not matter to them and there are times when I get preoccupied by that. When I saw this PhD advertised, one of my first thoughts was, ‘Why hasn’t this already been done? We’ve known about Mercury since human antiquity, so how can this map not already exist?’