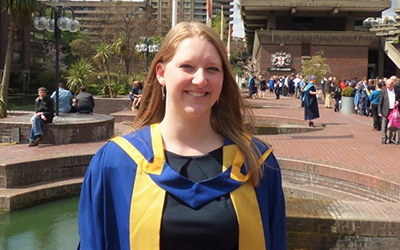 After my A levels I embarked on a four-year MGeol degree at the University of Leicester. I was particularly fond of volcanology and was keen to do further research after graduating, but wasn’t sure exactly which area to focus on, so I took a year out to consider my options. During this time, I volunteered at the volcano observatory on Montserrat, a volcanic island in the Caribbean. Whilst there I conducted research into the volcanic ash fall over residential areas and through this I became increasingly interested in the effect that volcanic eruptions have on society.

I started my PhD in 2010. I opted for the OU after discussing its very reputable volcanology group with one of my lecturers at the University of Leicester. My project – Forecasting the duration of volcanic eruptions – was funded by the Natural Environment Research Council (NERC).

My research was designed to further our knowledge of volcanoes and volcanic eruptions. In 2010 the Eyjafjallajokull eruption of South Iceland led to the closure of European airspace and proved to the UK just how important forecasting the duration of a volcanic eruption could be to those affected by such disasters. However, the duration of volcanic eruptions differs from one volcano to another, and even when we look at only one volcano it can experience a wide range of eruption durations. In an attempt to account for this variation I applied survivor function analysis (a branch of statistics commonly used in medical and insurance studies) to historical volcanic eruption data so that I could assess the likely duration of future eruptions. A paper introducing the model I developed was published in the Bulletin of Volcanology in January 2014.

I opted for the OU after discussing its very reputable volcanology group with one of my lecturers at the University of Leicester.

Although I’d originally intended to stay in academia, after much thought I decided it wasn’t for me. I didn’t want to work my way through a series of post-doctoral research posts, spending long hours working and being uncertain about my future and where I might be. I’d enjoyed doing outreach activities during my PhD studies, and decided that I wanted a career in this kind of work. During my final year, the science communication company science made simple was recruiting and I applied for a position as a science communicator and was successful.

I feel proud to have completed my PhD. OU study has definitely changed me as a person. I’m much more confident at writing and presenting. I’m self-motivated and my managers know that they can trust me to get my work done.

To anyone about to embark on PhD study with the OU, I’d say that it’s crucial to be interested and excited by the research you’re doing. It’s not a walk in the park and that enthusiasm for your work will keep you going no matter how hard it gets.