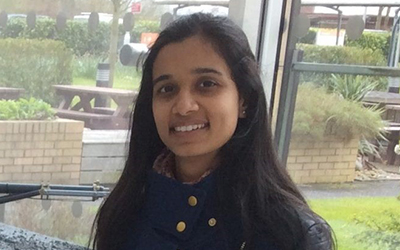 From a young age, I was fascinated by space. I remember we had a trip with my school to watch the stars in the night sky. I remember staring up into space and thinking ‘wow, I want to be there’. After that I was in love with space and, reading lots of books on the subject, came across the word ‘astronaut’. Most of my friends didn’t know what the word meant so I used to tell them.

Having been born in the north-east of India in an upper-middle class family, and growing up in Gujarat in the west, we had a good life and it was expected that I would secure a good job and be content with that, but I wanted to study further. It was very difficult to break those barriers as a girl.

I studied languages, maths, and science in school and was then accepted by Sardar Vallabhbhai Patel Institute of Technology at Gujarat University to study a bachelors in Aeronautical Engineering.

It was the first time Aeronautical Engineering was available at a university in Gujarat and was the first step on my journey to being an astronaut.

Once I left university, I started working in a company in Bangalore called Hindustan Aeronautics Ltd, which is the lead manufacturer of aircrafts for the Indian Airforce. It was a really interesting role, but everything was just aviation [not space aeronautics] – I was dealing with aircrafts; fighter aircrafts basically.

From a young age, I was fascinated by space. I remember we had a trip with my school to watch the stars in the night sky. I remember staring up into space and thinking ‘wow, I want to be there

When I went back to my job in India, I was back to square one as I wasn’t working in anything related to space. I decided to apply for a PhD in in-situ resource utilisation for planetary bodies, which is basically travelling to any planetary body and establishing if the resources could be usable by humans in some form if they were to land there.

It was difficult for me as everywhere the funding was a problem; there wasn’t any funding for non-European students. Luckily, my professor from the International Space University suggested that I consider opportunities at The Open University. I forwarded a cover letter and CV to the PhD studentship advertised by my current supervisors; I was interviewed and accepted, moved to the UK, and started as a PhD Researcher in the School of Engineering and Innovation in October 2015.

I am currently in my second year of a PhD, funded by The Open University; I am investigating the microwave processing of lunar soil for constructing 3D printed structures on the lunar surface. Basically, my research is about the process of building structures from lunar soil with the 3D printing technique. The lunar soil can be added layer by layer and bonded using microwaves as a heat source on the Moon. This could eventually lead to the development of human habitats with in-situ resource.

The OU has given me a great opportunity to work in a field I am interested in. It keeps my spirits high and keeps me going. I really am very happy and very grateful. Wherever I have studied, it has given me a broader perspective about people around the world, which I really enjoy.

Read the full interview with Vibha.