How did the Earth get its water? Asteroid sample gives a surprising answer Water is essential for life on Earth and is one of our most precious natural resources. But considering how our planet formed, it is quite surprising how much water we still have. The Earth aggregated from a cloud of gas and dust – a protoplanetary disk – and was incandescently hot for the first few million years. Its surface was kept molten by impacts from comets and asteroids. Earth’s interior was also (and still is) kept liquid by a combination of gravitational heating and the decay of radioactive isotopes.

That means that if there were any initial water (and organic compounds) on the Earth, it should have boiled off quickly. So how come there’s plenty of water on our planet today – where did it actually come from? A surprising new study, published in Science Advances, suggests that a type of asteroid we didn’t think contained very much water could be responsible – simultaneously demonstrating that the solar system is probably a lot wetter than had previously been thought.

Scientists have long debated exactly where the Earth’s water comes from. One theory suggests that it might have been captured from the asteroids and comets that collided with it. Another argues that water was always present in the rocks of the Earth’s mantle and was gradually released to the surface through volcanoes. 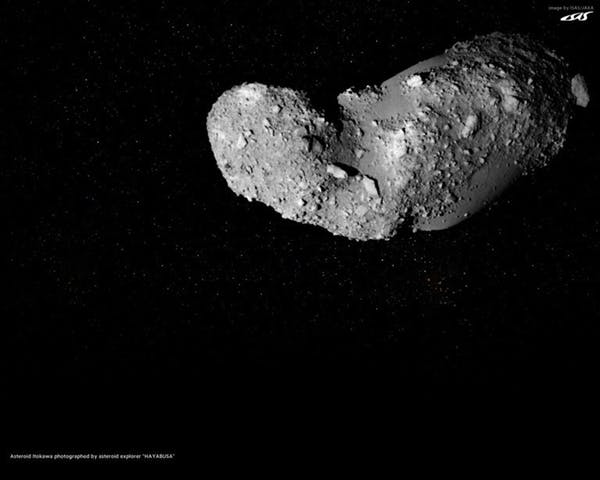 Thanks to the Japanese Hayabusa mission we now have fresh evidence. The spacecraft brought back a precious cargo of grains retrieved from the surface of asteroid 25143 Itokawa in 2010. The researchers behind the new study were able to analyse the water content of two grains. They used a sophisticated piece of kit called an ion microprobe, which bombards a sample with a beam of ions (charged atoms) in order to probe the composition of its surface.

The experiment was not easy – the grains are tiny, less than 40 microns (one millionth of a metre) across, and each grain was made up of several different minerals. The ion microprobe had to be focused on one specific mineral within each grain so that the authors could gather the required data. The species of mineral that they analysed was an iron and magnesium-bearing silicate known as a pyroxene, which is almost entirely free of calcium.

This type of substance is not usually associated with water – indeed, it is regarded as a Nominally Anhydrous Mineral (NAM). The lattice of a pyroxene crystal does not contain vacant sites for water molecules in the same way that, for example, a clay mineral does – so its structure is not necessarily conducive to taking up water. However, the sensitivity of the technique that the authors used was such that they could detect and measure tiny quantities of water.

Water is made from hydrogen and oxygen. But those elements occur as different isotopes – meaning they can have a different number of neutrons in their atomic nucleus (neutrons are particles that make up the nucleus together with protons). The researchers looked at the hydrogen isotopic composition of the water and discovered it was very close to that of Earth, suggesting the water on Earth has the same source as that of the Hayabusa grains.

The results raise several interesting questions, the first of which is how so much water came to be in nominally anhydrous minerals? The authors suggest that, during their formation, the grains absorbed hydrogen from the protoplanetary disk, which, at the high temperatures and pressures of the solar nebula, combined with oxygen in the minerals to produce water.

So far, so reasonable. But how is it possible that the water has remained in the minerals? They after all came from an S-type asteroid – one that forms in the inner and hotter part of the solar system. Itokawa has had a complex history of thermal metamorphism and collision, reaching temperatures at least as high as 900°C. But the researchers used computer models to predict how much water would be lost in these processes – and it turned out to be less than 10% of the total.

But how does all this relate to Earth’s water? The researchers speculate that following the grains’ uptake of water from the protoplanetary disk, the minerals aggregated and stuck together to form pebbles and eventually larger bodies such as asteroids.

If this mechanism worked for asteroids, it could also hold true for the Earth – maybe its original water came from these minerals coming together to help form the Earth. While water was then lost during the Earth’s early history, it was added again during collisions by the numerous S-type asteroids – as implied by the similarity in hydrogen isotopic composition between Earth and Itokawa.

This fresh look at an old problem – the origin of Earth’s water – has produced a surprising conclusion, one that suggests a large population of inner solar system asteroids might contain a lot more water than had been realised.

So while there is water everywhere in the solar system, the fact that it is hidden away inside minerals means that there is not always a drop to drink.