The OU is just starting its ‘Year of Mygration’ 2018, highlighting the ways in which the university is open not only to places, people and methods, but also the ways in which these are all implicated in mobility and migration. Migration is the movement of people from one place to another. In the process, people change the identity of the places they leave and the places they move to, as well as creating or elaborating relations between these places. Often there is a pervasive discourse that migrants do not ‘fit in’ and change the character of the places they move to, resulting in the call on migrants to integrate better (Erel 2010). However, research also points out how migrant place making can entail the regeneration of places, for example through creating new communities, shops, businesses and similar (Glick Schiller and Caglar 2009).

Using arts based participatory methods, the Participatory Arts and Social Action in Research  (PASAR) project, (funded by ESRC/ NCRM and undertaken with CIs Maggie O’Neill University of York, Tracey Reynolds University of Greenwich and Research Fellow Erene Kaptani) explored how migrants create a sense of belonging to the neighbourhood, nation and transnationally. We employed two key methods, participatory theatre methods and walking methods and combined these. The theatre methods are based on Erene Kaptani’s (Kaptani and Yuval-Davis 2008) Participatory Performative Practice, while we drew on Maggie O’Neill’s work on biographical mobile methods (O’Neill and Hubbard 2010).

We worked with three groups: a group of migrant mothers in North London, a group of girls from migrant families and a group of mothers affected by the No Recourse to Public Funds policy. We asked each group to draw a map from the place they call home to a place that is important to them, including other places they pass along the way. 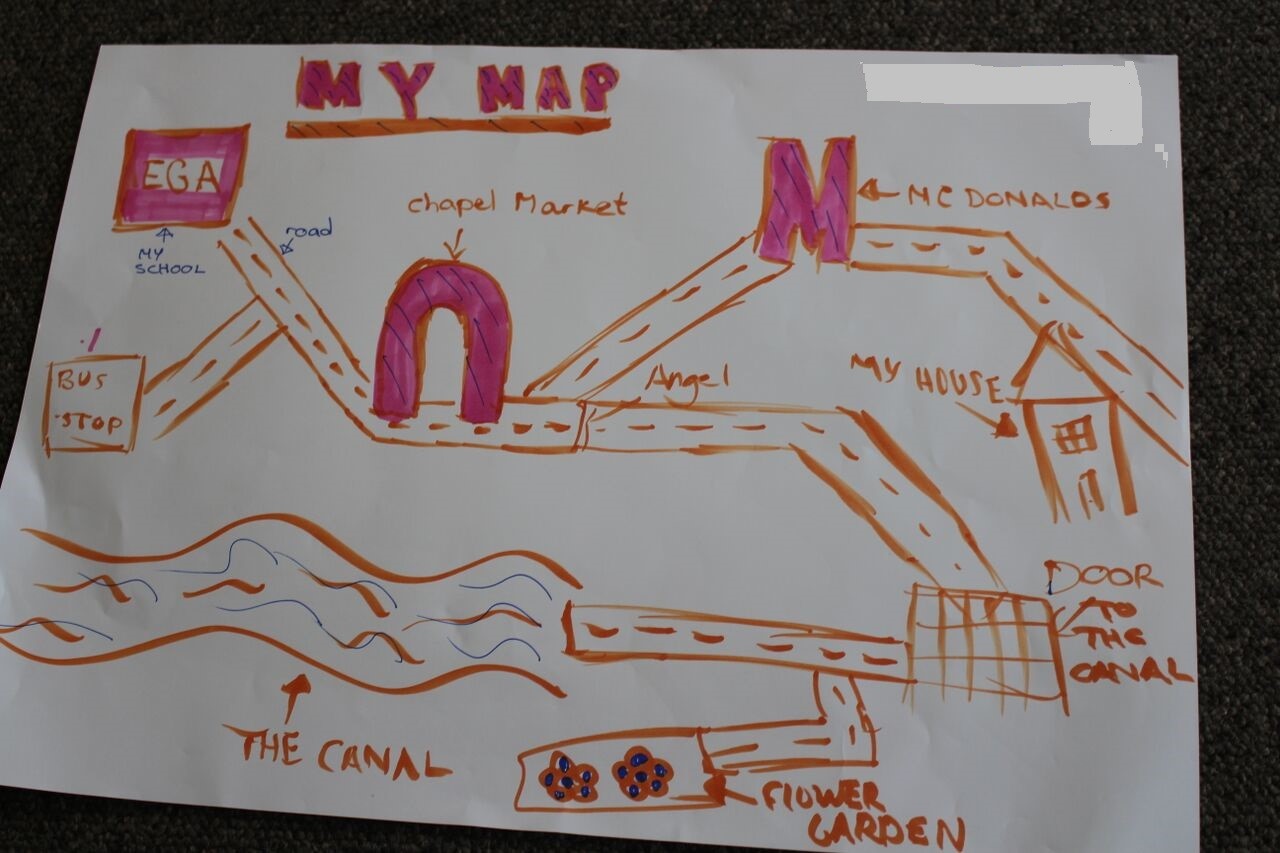 Then we undertook the walks they had drawn in their maps in small groups or as pairs, noting anything the participants pointed out on the way. We audio-recorded the conversations and participants took photographs, some walks were filmed by film-maker Marcia Chandra. After the walks, we developed the photographs and participants shared the meaning of the photographs they took with each other and the researchers. We combined this with theatrical methods in various ways. 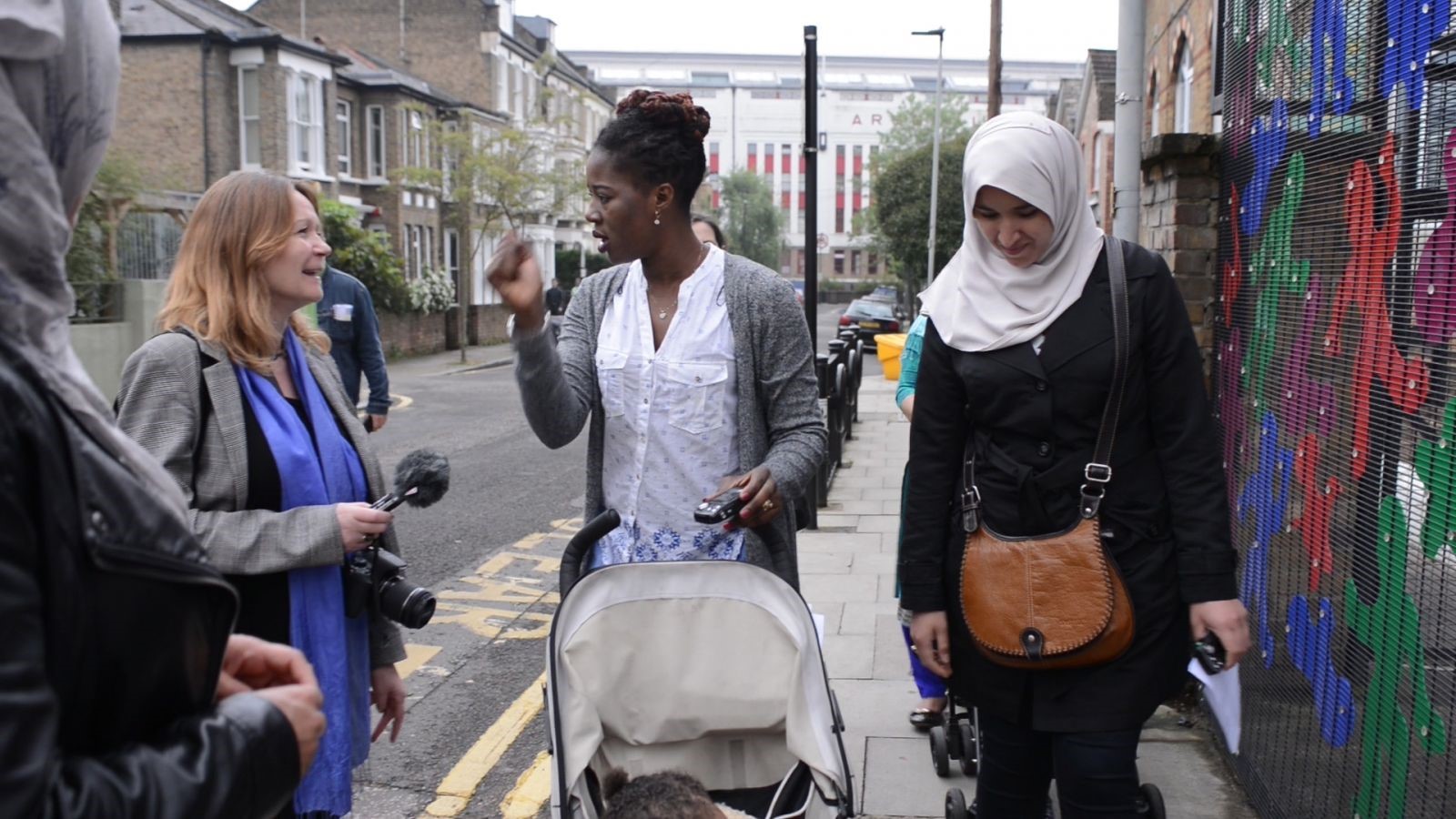 During a walk with the mothers in North London, we went to the local nature reserve, enjoying the peace and quiet of the place, listening to the sound of the wind in the leaves and looking at the pond. The participants were reminded of their villages in Bangladesh. Though had they all lived in the city, they went to visit relatives in the village frequently, sometimes for celebrations such as weddings and this carried on nowadays when they visited Bangladesh for their holidays. This embodied, sensory quality of the walks is one way in which migrants make meaningful the places they live and create relationships to the places they have come from. In a later session, we recreated the sounds and feelings of the walk in the park and the memories of village visits in Bangladesh theatrically, as you can see in the first couple of minutes of the clip Integrating Methods: From Walking to Soundscapes.

This work clearly showed the ways in which migrants’ place making can usefully be explored through creative methods. In a new project ‘Migration Making Places – Making People’ (funded by the ESRC/ IAA with CI Giles Mohan and co-PI Jacqueline Broadhead, Oxford University), we will further explore how arts based methods can be used to better understand these processes and communicate the complexities and nuances to policy makers and the general public. Increasingly important against the backdrop of simplistic representations of migration in public debates, this series of workshops, events and symposia will take place during the OU’s Year of Mygration, so watch this space.

Written by Dr Umut Erel, Senior Lecturer in Sociology at the Open University, UK. Umut has widely published on migration, ethnicity, racism, gender and class and how these issues play out in practices of citizenship. She is PI of Participatory Arts and Social Action in Research, exploring theatre and walking methods for research. She is part of the ‘Who are We?’ Project at Tate Exchange, reflecting on migration, citizenship, participation and belonging across arts, activism and academia  She is PI of the 'Migration Making People, Making Places' ESRC/IAA project.