In today’s post, Dr Emma Barker discusses the immigration of Savoyards to Paris in the 18th Century as depicted through art at the time as a way of reflecting on the issue of contemporary illegal street vendors. Emma is a senior lecturer in Art History in The Open University’s Faculty of Arts & Social Sciences.

Last week, the Guardian ran a piece about the debates in Spain around illegal street vendors, many of whom are undocumented migrants from West Africa. According to the paper, right-wing parties are seeking to revive their popularity by mounting attacks on the vendors who mostly sell Chinese-made goods to tourists in Barcelona, Madrid and other cities. The phenomenon of street vendors from Africa and elsewhere will be familiar to many people, particularly from holidays taken in well-known tourist locations across Europe – in Paris, for example, especially around the Eiffel Tower. It’s far from being a new phenomenon, however – if you had visited Paris two hundred or so years ago you would also have seen people from elsewhere trying to make a living on the streets.

During the eighteenth century, the largest immigrant community in Paris came from Savoy on the south-eastern borders of France (the historical territory of Savoy is now divided between France, Switzerland and Italy). Many peasant families in this poor and mountainous region could not make an adequate living, with the result that hundreds of (mostly male) Savoyards migrated northwards during the winter to make some extra money. As with migrants today, however, a combination of dire poverty and the political difficulties of their homeland, as well as the danger and difficulty of the journey, meant that many Savoyards became permanent exiles. Some at least were thinly disguised beggars, the goods they sold and the services they provided often only a pretext for loitering in the streets.

As an art historian specialising in eighteenth-century French art, I became aware of the Savoyard presence in eighteenth-century Paris as a result of the numerous images that were produced of them at the time. Perhaps the most famous are those by Antoine Watteau, who produced around a dozen of Savoyard street entertainers. The above drawing by Watteau, for example, gives a vivid impression of an old Savoyard man, whose tattered clothing and resigned expression suggest that he has been migrating between his home and Paris for many years. He has a large box of curiosities tied to his back; the box on which his left hand rests would contain a marmot, a small furry animal that would have been part of his act.

Most Savoyards in eighteenth-century Paris were much younger, however – many were young boys, who earned their living not only by entertaining people but also by running errands, blacking boots, grinding knives and, increasingly, sweeping chimneys. It was reported in 1760 that the vast majority of chimneysweeps in Paris came from Savoy. Hardly any images exist, however, of young Savoyard chimneysweeps – the wealthy inhabitants of eighteenth-century Paris don’t seem to have been especially bothered that impoverished children far away from their homes risked their lives to sweep the city’s chimneys. This sight was not one that they cared to contemplate in works of art.

One artist who did focus on the sufferings of the young Savoyard was Jean-Baptiste Greuze, about whose work I’ve written extensively. He even produced an image of a young chimneysweep, almost certainly a Savoyard, apparently cowering at the feet of a woman with a broom – though the image still can’t be said to convey how hard the life of such a child must have been. By the end of the century, the exploitation of Savoyard boys by entrepreneurs who employed them to sweep chimney did start to arouse widespread concern. One commentator, Louis-Sébastien Mercier, writing in the early 1780s, remarked: 'It is indeed cruel to see a poor child of eight years old…. asking you five sous as the price of his danger and his suffering’.

By this time, moreover, Savoyards had become renowned in Paris for their devotion to the families, to whom they sent home all they could of their meagre earnings. Mercier draws a contrast between these ‘models of filial piety… dressed in rags’ and the spoiled and selfish offspring of the rich in their luxurious outfits. As a result, some wealthy parents chose to have their offspring portrayed in the guise of Savoyards, thereby suggesting that they were similarly virtuous and loving, as in the case of this portrait by Francois-Hubert Drouais of two aristocratic boys with a marmot in a box; strapped to the standing boy’s back is a hurdy-gurdy, an instrument especially associated with Savoyard street performers. The boys’ clothes are, however, made of velvet, with gold buttons (image below).

What I think that this example shows is just how inconsistent people’s attitudes towards immigrants were in the past, as so often today. We rely on their labour in many different ways, but don’t really want to think about the conditions that have led them to make their arduous journey nor their continued sufferings. We tend to be much more sympathetic towards them when we think of them as people with families, like ourselves, but this sympathy doesn’t necessarily lead to any sustained action on their behalf. The exploitation of young Savoyards in Paris continued for much of the nineteenth century, despite it being widely perceived as a scandal; it wasn’t until the 1870s that legislation finally put an end to it. 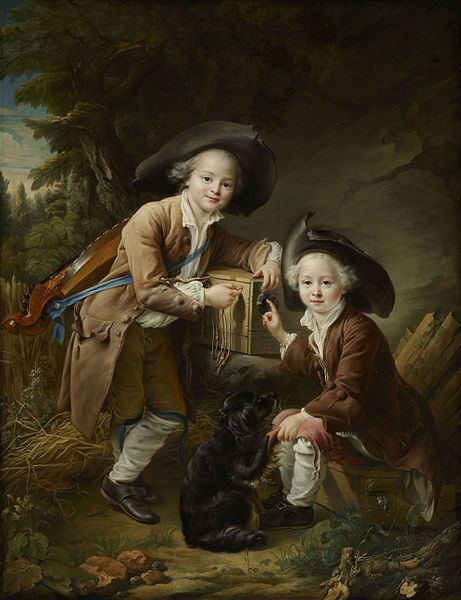