Open University researchers have received £1 million from the UK Space Agency to contribute to the design of new sensors to study space weather.

A team of researchers in the OU’s Centre for Electronic Imaging, led by Dr Matthew Soman, Space Instrumentation Research Fellow, has secured continued support from the UK Space Agency (UKSA) to test and calibrate the sensors for an instrument on-board the Solar wind Magnetosphere Ionosphere Link Explorer (SMILE) spacecraft. This mission, a joint venture between the European Space Agency and Chinese Academy of Sciences, will help scientists study space weather through observing the interactions between the solar wind and Earth’s magnetosphere. 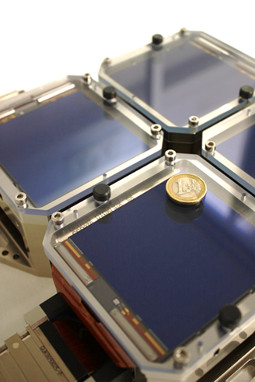 Four of the pre-development sensors manufactured by Teledyne-e2v that are being tested at The Open University for their SMILE activities. These devices are on loan from ESA.

Reseachers at The Open University have already been modelling the performance and contributing to the design of the sensors for the Soft X-ray Imager on-board SMILE, and this continued UKSA funding will support their role in the instrument consortium led by the University of Leicester. The Open University will calibrate and test the newly manufactured devices with the aim of understanding and optimising their performance before they are integrated into the rest of the instrument and launched in 2023.

Dr Soman said: “After working on the development of the detectors for SMILE, we’re excited that UKSA have funded the next phase of the programme. Our testing and calibration of the detectors will feed directly into the Soft X-ray Imager instrument development and delivery of optimised flight hardware.”