There are just three moons in our solar system that measure more than 5,000km across. Of these, Jupiter’s moons Ganymede and Callisto are airless and have ancient heavily cratered surfaces. But Saturn’s largest moon, Titan, abounds in landscapes that are eerily Earth-like – and it may even harbour life.

But we have had a rather limited view of what’s lurking beneath the thick atmosphere of this mysterious world. A new study, published in Nature Astronomy, however, unveils the first geomorphologic map to cover the whole of Titan. This is important because it shows how Titan’s various kinds of terrain relate to each other.

Despite the fact that Titan’s “bedrock” is ice, its surface is so cold (-180°C) that the ice is sufficiently strong and rigid to behave just like rock on Earth. Furthermore, Titan is the only moon with a dense atmosphere, having a surface pressure that is one and a half times that of Earth’s.

In common with Earth, by far the most abundant atmospheric gas on Titan is nitrogen. The moon’s second most abundant gas is methane, which makes Titan Earth-like in a different but very remarkable way. The gaseous methane can condense to form clouds from which droplets of liquid methane can fall like rain. Methane rainfall erodes the surface, carves out channels, and drains into depressions to form methane seas and lakes. Evaporation back into the atmosphere completes the cycle, so Titan has a methane cycle to match Earth’s water cycle.

Despite two Titan flybys by NASA’s Voyager probes in 1980 and 1981, we knew little about the moon’s surface until the Cassini spacecraft arrived to orbit Saturn between 2005 and 2017. This is because sunlight causes the molecules of methane high in Titan’s atmosphere to link into larger molecules, making a high-altitude smog that the Voyager cameras could not see through.

But Cassini was equipped to cope with this, carrying an imaging radar system and near-infrared and thermal infrared cameras that could detect radiation reflected or emitted from the ground in specific wavelengths that the smog does little to obstruct. Cassini also sent a lander called Huygens down to the surface by parachute, giving us unimpeded visual views from below the clouds – albeit of only a small area.

The most detailed images to inform the new geological map come from the radar. These cover slightly less than half the globe so, to achieve global coverage, other Cassini data had to be used to fill in the gaps. 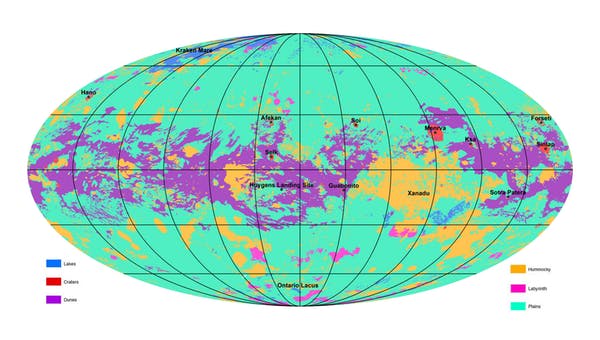 Six major units are on the global map, depicted at a scale of 1:20 million. Plains make up 65% of the globe, these are smooth and dark, possibly because of smog-derived sooty particles on the ground. In a belt hugging the equator, the plains are overlaid by extensive fields of dunes (17% of the globe by area), sculpted by winds that blow from west to east.

These dunes are not sand grains made of quartz as they would be on Earth, nor grains of water ice, but particles made from organic molecules that presumably originated from the atmosphere in the same way as the dark colouring of the plains (derived from smog). 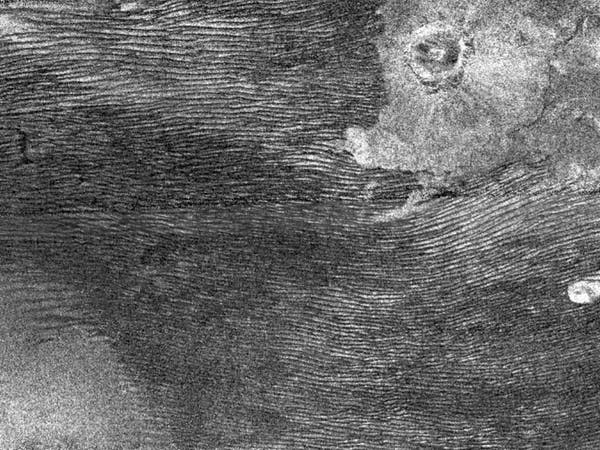 Exposed icy bedrock is apparent in places where neither plains nor dunes have covered it. This is divided into a “hummocky” unit (14% of the globe) characterised by hilly and mountainous ground. There are some branching valleys here (including some seen by the Huygens lander), but such valleys are more extensively developed in a unit named “labyrinth” (1.5% of the globe), which is perhaps ice mixed with organic material that has been more strongly cut by methane rivers.

Impact craters occupy just 0.4% of the globe, and there are only 23 that are more than 20km in diameter. Their scarcity attests to Titan’s active geology – erosion of high ground, burial under sediments, and possibly erasure by volcanism (spewing out ice instead of molten rock). 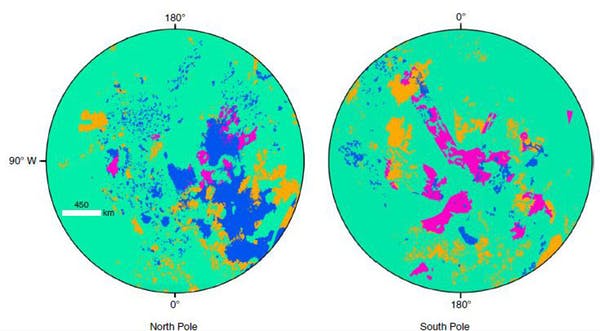 Area within 35 degrees of each of Titan’s poles. There are many more lakes in the north than in the south. Lopes et al. (2019), nature

Titan’s polar regions contain over 650 lakes or seas covering 1.5% of the total surface area. Some are currently dry, but many are filled by liquid methane. Parts of the shoreline of the second largest lake, named Ligeia Mare, which is 400km across and up to 170 metres deep, have an odd shape suggesting that either the lake level has risen, or that parts of the land surface have sunk due to tectonic forces. Elsewhere, and on other lakes, there are shoreline features suggestive of wave action and river deltas. 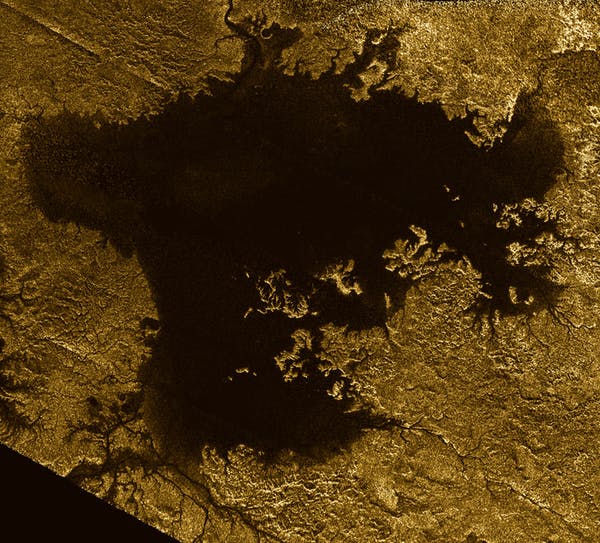 Ligeia Mare with a shoreline symptomatic of a drowned landscape of river valleys. NASA/JPL-Caltech/ASI/Cornell

If Titan is home to any microbial life, this is much more likely to be in Titan’s water ocean deep in its interior, rather than at the surface. But understanding the distribution of landscapes documented in the global map is a vital step towards understanding the environments and history of this amazing world.

Read more: Flying on Saturn’s moon Titan: what we could discover with NASA's new Dragonfly mission