Dr Roth joined the OU in 1973 and has played a leading role in some of the OU’s most popular courses, not least chairing an Introduction to Psychology course studied by tens of thousands of people, including many thousands in Scotland.

Her work on autism has been highly influential in Scotland and has received significant support from the Scottish Government over a period of many years, including a collaboration to build greater awareness of autism in Scotland through Understanding the Autism Spectrum, the short course she developed and chaired from 2009-2018, since succeeded by a very popular free Badged Open Course. 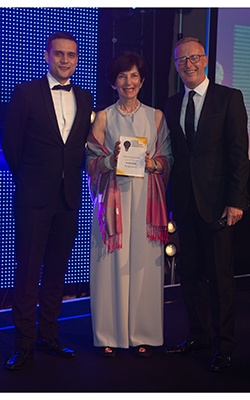 “I am thrilled and honoured to receive this award. My work in Scotland includes very fruitful collaboration with the Scottish Government, Autism Network Scotland and the OU in Scotland to promote autism understanding and capacity building in Scotland. I was born in Dumfries and Scotland has a special place in my heart.”

Two OU projects were also shortlisted at the awards.

Work with NHS Grampian and North East Scotland College to widen access to nursing education in the Grampian region, enabling experienced health care support workers to progress in their careers, was recognised in the Widening Access category.

Efforts to improve gender balance in Engineering through examining every stage of the student journey for unconscious bias and possible improvements, in conjunction with Equate Scotland, also featured in the Equality, Diversity and Inclusion category.