Back in 2012, the OU undergraduate autism course developed by Dr Ilona Roth, Senior Lecturer in Psychology, and colleagues was chosen by the Scottish Government to support the aims of the Autism Strategy for Scotland, namely raising awareness, enhancing understanding and building capacity relevant to the needs of people with autism and their families in Scotland.

Between 2012 and 2015 the Scottish Government Autism Reference Group funded around 520 individuals to study the course.

A survey at the time showed that a substantial number of these funded learners were caring for a child or relative on the autism spectrum, while even more were working with autistic people.

A majority rated the course highly, saying it had enhanced their understanding of autism, and developed knowledge and skills relevant to work, career and daily life.

Seeing how much this group of students had benefited from the opportunity for free study was one factor convincing Dr Roth of the need for an autism course providing free online study for all, both in the UK and worldwide.

Work on a new free course started in 2016 with external funding from the Dangoor Foundation, and Understanding Autism was launched in September 2018. 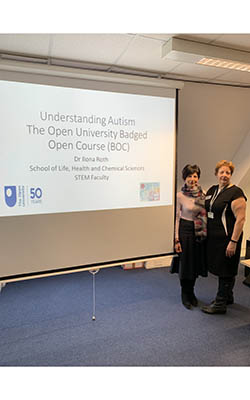 One of 46 free ‘Badged Open Courses’ on The Open University’s OpenLearn platform, Understanding Autism is endorsed by the Continuing Professional Development (CPD) standards office, and has received more than 7000 enrolments since launch, of whom an estimated 700 are studying in Scotland.

At last week’s two Edinburgh meetings around 40 volunteers recruited to study and evaluate the course via Autism Network Scotland met for initial induction and workshop sessions.

The volunteers have now begun their eight weeks of study, and on completing the course will be providing feedback on the materials and the impact they may have had.