Growing the number of college leavers / graduates with practical foreign language skills is a priority that universities and colleges in Scotland have been tasked with by the Scottish Funding Council. 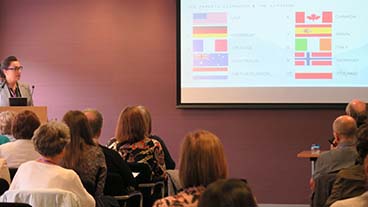 The Open University (OU) in Scotland partnered with Scotland’s National Centre for Languages (SCILT) for an event in Edinburgh that brought together key groups to address this challenge: trade and cultural bodies, employers, lecturers and students within colleges, OU Scotland Languages tutors, the Scottish Government and the Scottish Funding Council.

Key issues facing businesses and employers around language skills were discussed, and the chance was taken to kick-start future collaboration and solutions within the college sector which would bolster language skills.

They demonstrated the crucial importance of language skills and intercultural awareness in the workplace, and across the workforce in a modern Scotland within a global marketplace. 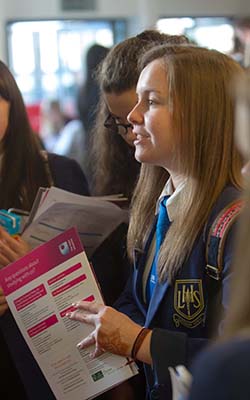 Pupils from Secondary 3-6 have found out from The OU in Scotland's Languages team how learning languages and enhancing intercultural knowledge could boost their skills and employability, at Business Brunches held in Glasgow, Edinburgh, Paisley, Dundee, Aberdeen and Inverness in 2015 - 2017.

These were organised by Scotland’s National Centre for Languages (SCILT) and the University Council for Modern Languages Scotland (UCMLS), as part of their work in supporting the Scottish Government’s 1 + 2 Language Policy. Under this approach, by 2020 every child should have the opportunity to learn a modern language from Primary 1 onwards, and a second modern language from Primary 5.

As a Scotland-wide university The OU has been able to participate at all locations, providing teachers, pupils and business representatives with information about The OU's Languages curriculum and MOOCs (Massive Open Online Content), plus its Young Applicants in Schools Scheme.

For more information about working with our Languages team, email Sylvia Warnecke and Jamie Marshall