Like many Open University students, Royal Air Force Police Corporal Abi Harding, 32, is no stranger to studying with a newborn baby on her lap. After becoming pregnant during the first year of her Sport, Fitness and Coaching degree, determined Abi has continued to juggle her studies, work life and has just welcomed her second child.

To say life is busy for the mum of two is an understatement, yet Abi’s motivation comes from her family and wanting to secure a career as a PE teacher after she eventually leaves the Royal Air Force (RAF):

“I applied for university to become a PE teacher, but I decided to follow a career with the RAF, so my academic education stopped at college. I’ve been in the RAF for 11 years now and want to stay in the force for as long as I can, but I also want to make sure I’ve got a career for when the time comes for me to leave. Throughout my whole life I’ve always played sport – I still play football and rugby for the RAF.

“Because I enjoy sport so much, I decided to plan a future career as a PE teacher in primary or secondary. I looked into teaching and discovered that you need a degree and then a PGCE (Postgraduate Certificate in Education) to become a teacher, so I thought I’d start by studying a degree in something I enjoy and know a little bit about and that’s why I chose to study sports coaching.”

Abi’s course is part-funded by her employer and finding a university that would allow her to study around work and other commitments was essential. After a colleague recommended the OU, Abi realised part-time flexible learning would be a perfect fit for her needs. However, life was about to get even busier, as she explains:

“When I started the first module in October 2018, I found out I was pregnant with my first child. I had an assignment due three weeks after the birth – I was a bag of emotions! During most of that first module I was working full-time Monday to Friday. I did my OU study two evenings a week for two or three hours. When it came to writing assignments, I would put in extra work to make sure everything got done.

“I’m now on my third module and I have a one-year-old and a newborn, which is a challenge! Trying to juggle work, being a mum and doing a degree at the same time isn’t easy. You have to make yourself do it. Studying is not always something you want to do when you’ve had a day of it, but you’ve got to get it done. Some nights I just want to sleep!”

The juggling act of being a student-parent

Abi admits that there have been times when she has been close to giving up her studies, especially when her second child was just born. “I felt so tired of trying to juggle everything,” she says, though she is determined to finish what she started:

“My family has inspired me because it’s going to benefit all of us in the long run – and, if I’m honest, myself, because I’m a very determined person. And because I’m interested in the subject, I find all of the work enjoyable. Learning doesn’t seem like a chore if it’s something that you enjoy.”

If Abi needs advice or support, she knows she can also rely on her tutors and the rest of the OU student community:

“The tutor support you get with the OU is massive. I don’t even start my assignments without going to the tutorials because I find them really helpful. Really engaging. And because the students are all logged on together you can all ask questions in the chat bar about anything you don’t understand. It’s great because sometimes people will ask questions that maybe you didn’t think of. Or get answers to things you wanted to know but you didn’t know how to phrase the question. Personally, I massively benefit from the tutorials.

“I’m in a WhatsApp group for the module and it’s supportive because there’s a lot of people in there that are in a similar situation to me. For example, there are students who are studying while home-schooling kids. When they’re saying, ‘I can’t do this’, you know that you’re not the only one thinking that.”

‘It will be worth it in the end’ 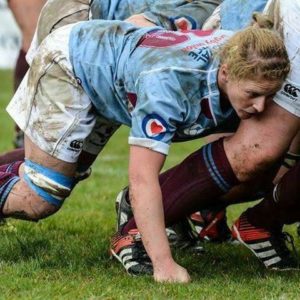 Abi playing rugby for the RAF

Abi is now in her third year of her degree and though she doesn’t plan to leave her RAF role anytime soon, she knows studying with the OU now means she will be ready to step into a teaching career in the future:

“Doing the OU course means I know that I’m set up for life, so that when the time comes it’s just a case of doing the PGCE and getting qualified teacher status, and then I can be a PE teacher.

“If you’re thinking of doing an OU course I would say look into what you want to do first, to make sure it’s definitely the right route for you, and then just enjoy it, embrace it. Accept that there will be times when it’s not that easy, but it’ll be worth it in the end.”

This article, written by Carly Sumner Sinfield, was originally posted here: Juggling a degree, family and the Forces | OU News