May Academic of the Month: Sean Williams

This last month has seen my attention spread widely across several different projects, all at different stages of commencement or completion. In addition to working on a new three year research proposal which will relate electronic musical instruments with collections and science and technology studies, I have just started work on a smaller pilot project based around Tim Souster‘s work. 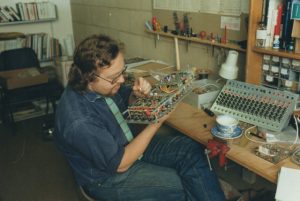 Tim was involved in composition and performance with his early position as composer in residence at King’s College Cambridge leading to work across a wide range of genres, most notably as part of Intermodulation and 0db in the early 1970s. Many people will be familiar with his work for television via the music he composed and arranged for Hitch-hiker’s Guide to the Galaxy, but he also wrote for small and large ensembles, many including electronics, wrote and produced library music, worked as an assistant for Stockhausen from 1973-4, wrote about music extensively and set up the electronic music studios at Keele University in 1975.

I’m currently looking at some of Tim’s scores for acoustic and electronic instruments with the aim of understanding the affordances of the original electronic elements and communicating these findings in addenda to the scores so that they can be interpreted using contemporary instruments and technologies. A key problem with trying to build a repertoire of electronic scores is that so many were written with reference to specific instruments that are no longer available, and in many cases it the idiosyncratic characteristics of such instruments that may be the most significant factor affecting how they sound.

This builds on my PhD case studies into Stockhausen’s Maihak W49 band-pass filter, and into King Tubby’s mixing desk, as well as other research done into the 1950s Westdeutscher Rundfunk Studio for Electronic Music. Another project nearing completion is the editing of a series of interviews that I did with Gottfried Michael Koenig who worked in the Cologne studio from 1954-64 and then went on to direct the Institute of Sonology in Utrecht. He was amongst the very first people to experiment with voltage controlled synthesis and algorithmic composition using computers in the 1960s.

This entry was posted in Academic of the Month, Research. Bookmark the permalink.