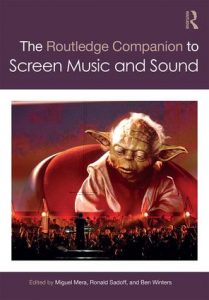 This month sees the publication of a major new work in the field of screen-music studies: the Routledge Companion to Screen Music and Sound, which is co-edited by Music Department Lecturer Ben Winters. In its 600+ pages, it features 47 chapters written by 50 authors drawn from four continents. Here’s a selection of reviewer comments:

“Miguel Mera, Ronald Sadoff, and Ben Winters are on the cutting edge of the discipline here….The editors and their contributors ask nothing less of us than to re-think what we understand screen sound to be” (Kathryn Kalinak)

“A rich exploration of screen music in its many forms, with an impressive array of topics and contributors…It heralds a re-thinking of what is studied and how” (Marcia Citron)

In addition to his role as co-editor, Ben contributed to the introduction and a roundtable discussion on narrative, and wrote a chapter called ‘Idolizing the Synchronized Score: Studying Indiana Jones Hypertexts’. The volume was launched at the annual conference Music and the Moving Image in New York, at which Ben also gave a paper entitled ‘Korngold, Modernity, and the Technology of Film’.