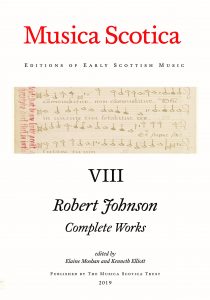 Robert Johnson Complete Works, edited by Dr Elaine Moohan is now in press and will be available shortly from the Scottish Music Centre, Glasgow. This edition of Johnson’s (d. c. 1560) works is the result of a lengthy research project that started with Elaine’s late colleague, Dr Kenneth Elliott, in the 1960s. All of the works have been newly edited for this publication over a period of three years, supported with funding from the Royal Society of Edinburgh that enabled Elaine to consult some sixty manuscript sources and nine early printed music and literary books in UK and American libraries. To date, only a handful of Johnson’s works have been published in modern notation. This is the first time that all of his surviving works, including some fragmentary pieces, are published together in a format that is both scholarly and suitable for performers.

There are nine Latin- and eleven English-texted sacred works, in a range of styles with something to suit all choral abilities. Three of the four English songs have accompaniment for instrumental ensemble, and the works solely for instrumental ensemble are in three, four, and five parts. The volume includes reconstructions of five of the nine fragmentary works.