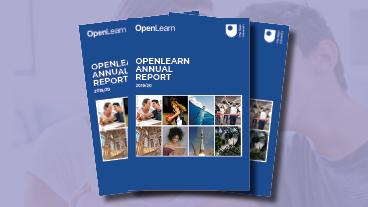 The latest OpenLearn annual report has been published. It shows that interest in the free learning site has soared to unprecedented levels, with global visitors surpassing the 80 million mark since its launch in 2006. OpenLearn, which is an integral part of The Open University (OU), offers bite-sized learning across a broad range of topics. Many OpenLearn visitors make the transition from informal to formal learning, inspired and emboldened by their experiences on the platform.

The record number of visitors is partly due to a surge in demand following the advent of Covid-19 and lockdown restrictions, when there was a five-fold increase in visitors to the site in just a few days.

The site had its busiest month ever in April, notching up 2.5 million visitors. One in four visitors enrolled on a course, leading to 1.8 million enrolments. Not only that – almost one in two people who enrolled on courses in this period have completed the course. This means there have been 927,000 course completions and that 76,000 digital badges have been awarded across 2019/2020.

Research carried out between April and May 2020 by market researchers Opinium Research, on behalf of the OU, confirms what the OpenLearn data tells us - that a lot of people are actively interested in learning new skills.

The OU-commissioned research found that large numbers of employees are currently pursuing distance learning opportunities. Why? Because they are concerned about job security and the uncertainty caused by the pandemic and so are taking career development into their own hands.

Of the 2,002 adults interviewed during the first national lockdown, almost a quarter (24%) of them have engaged in additional learning in order to learn new skills and make themselves more employable. Young people appear to be particularly concerned about their career prospects, with over a third (39%) of 18-34 year olds saying they would pay for development opportunities themselves if it made them more employable.

A significant number would like their employers to give them more of a steer on skills development – 23% would like this, with the younger cohort again being particularly interested in this (38%).

In response to lockdown, the OpenLearn team created several new learning hubs, including one providing business support for SMEs. Initiatives were also launched across the UK to help people affected by Covid-19, particularly furloughed workers, to improve their digital and numeracy skills. Five OpenLearn courses were chosen to be part of the Department for Education’s National Careers Service Skills Toolkit, available to people in England, with a further 12 OpenLearn courses added in September. In Scotland, there is a similar initiative, called My World of Work, in Wales there is Working Wales and in Northern Ireland, NIDirect.

These four schemes have attracted over 100,000 visitors to the OpenLearn site.

OpenLearn can be used for informal learning, but it also can and is being used as a bridge to more formal learning by organisations. One example of this is a learning programme available to jobseekers as a result of a partnership between The Open University, the Department of Work and Pensions (DWP) and Jobcentre Plus (JCP). Under this programme, 750 JCP offices across England, Scotland and Wales will give jobseekers and claimants access to a hub of free, skills-based OpenLearn courses. Those courses, which cover a wide range of topics, including leadership, networking and career resilience, will make jobseekers more employable and help plug common skills gaps.

Find out more about how OpenLearn can be used by organisations