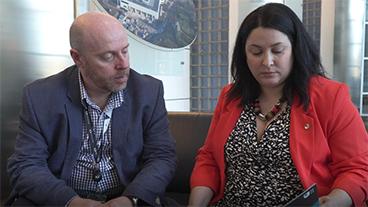 In 2018, a senior manager at DXC Technology approached the Open University regarding Graduate Apprenticeships with a view to undertaking a programme himself. After looking into it, his manager – a Director of Services - was so impressed by what was on offer that he also joined the first cohort of the Master’s Graduate Apprenticeship in cyber security.

A global IT services and solutions leader, DXC Technology helps companies across the globe run their mission-critical systems and operations while modernising IT, optimising data architectures, and ensuring security and scalability across public, private and hybrid clouds.

Like many other organisations, DXC Technology is facing a digital skills shortage, so the opportunity to upskill and reskill existing employees in such a business-critical area was immediately recognised.

Lauren says the apprenticeship has been really beneficial in a variety of ways. Firstly, there is the course content, which has enabled Lauren to look at different areas of information security. This has included, for example, quantum computing and its impact on cartography and the security risks regarding driverless cars.

What Lauren has learnt through her studies has also fed back into her everyday work, making her more effective in her current role. “It has really complemented my day job,” she says.

As well as increasing her knowledge and understanding, undertaking the apprenticeship has boosted her confidence a lot. And it’s proved to be great for networking – Lauren has formed connections with people all over the world as a result.

Lauren is only part way through her apprenticeship, but she is already an enthusiastic champion of the programme. She regularly recommends it to people in her role as a STEM ambassador, particularly those who are unsure about whether to commit to university and more studying or whether to enter the jobs market and start earning.

I’ve spoken to lots of young people to say if university is not the route you choose to go down straightaway you’ve always got that opportunity later on in life through the OU graduate apprenticeship.

DXC Technology has benefitted hugely from having employees doing The Open University apprenticeships. As Lauren says, apprentices can apply their new skills and knowledge in the workplace from day one. The programmes are designed around individual, team and organisational needs and a lot of the learning is integrated in the flow of work, so there are benefits on many levels.

Find out more about Graduate Apprenticeships in Scotland