The Centre welcomes a new member to the Steering Group 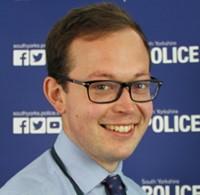 We are pleased to announce that Jamie Smith from South Yorkshire Police has been elected as a Steering Group member for the Centre for Policing Research and Learning.

Jamie is new to CPRL and brings with him a wealth of policing experience. He has worked in a variety of analytical roles over a 12-year career including both within the Office of the Police and Crime Commissioner and more recently within Business Change & Innovation at South Yorkshire Police.

In his current role he manages the Data Intelligence Team which is tasked with primarily understanding, analysing and predicting demand for the force. This work involves utilising a variety of advanced methods that help to inform organisational decision-making right through from immediate operational matters to longer term strategic considerations.

Academically, Jamie has recently completed a Masters degree in Social Research Methods from the Sheffield Methods Institute. This culminated in an independent research dissertation examining the effect of social fronters on crime and offending. His team also support several police and academic collaborations, including more recently, research into the effects of street lighting on crime.

His experience both academically and professionally brings a variety of perspectives to the Steering Group role where he aims to further contribute to shaping the evidence-based policing agenda.

On appointment to the role, Jamie states:

I believe in providing the best possible evidence to decision makers and am a strong advocate of the evidence-based policing agenda. Police-academic collaborations are some of the most fruitful I’ve ever been involved in and I’m excited to be able to contribute further to this through my election to the Steering Group role.

Violence Against Women and Girls: Policing, politics and practice