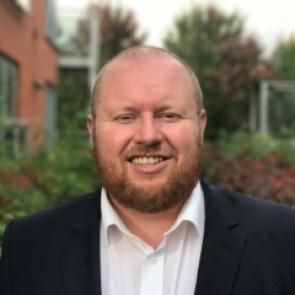 Matt joined The Open University (OU) five years ago as Teaching Director: Policing, on a fixed term contract to explore the possible development of new curriculum in policing. Five years later, after leading the setup of a new Department and Policing Curriculum, he is now departing the OU for a new adventure – that of a Senior Lecturer in Criminology at Swinburne University in Melbourne, Australia. Matt reflects on his time spent in an interview with Dr Nicky Miller…..

What first attracted you to The Open University?

“I wanted a bit of an adventure. My passion in my previous job at Northumbria University was around blended learning and using technology and so it seemed kind of a bit serendipitous to come and do something like that here at The Open University.

It was about doing something different - the PEQF was new and there was a buzz of excitement about what the potential of that was. There was a lot of speculation on what such a programme might look like but at that point nobody had put it together. I had the opportunity to craft the programme and that really excited me. When I arrived I was the only person at that time working on the policing curriculum and it was a completely blank canvas. I would never have predicted where we are today in terms of having the big team, the programme and the partnership – I’m very proud of what I am leaving.

We have such a great team of interdisciplinary academics who are all designing learning as part of our policing programmes; everybody has a different view, and they all see the potential of doing something different in policing. You can sometimes have people who are very singular in their view around how policing is done but we’re going in and disrupting that a little bit. It has made the journey a little turbulent at times, because with those partnerships you have to challenge and say that there is a different way of doing it; you are influencing them to go down a different path and that makes it exciting as well!”

What would be the biggest challenge that you have faced in your five years?

“It’s definitely procurement – you have to win a partnership and there were real differences in what forces were asking for, but this had to be coupled with the fact that we [The OU] are also a business and there is a commercial element to these partnerships. There was the challenge of providing for the forces but also balancing this from our organisational perspective. I have never been involved in procurement before – the commercial negotiation and contracting side of things. We were really having to push boundaries as we were all new to this, not knowing the answers and putting in place new solutions [for both the academics and the police partners]. When one of our contracts landed there were a lot of questions [internally] about what the police were asking for and we put a meeting together with different people in the organisation who all were then looking to me to know what the contract meant, what would be the consequences of certain actions and how would our policing partners respond. It was exciting but it was overwhelming at the same time – I was new to the post!”

What was your proudest moment in your five years?

“It was winning the North Yorkshire contract. There was a huge pressure on winning a partnership and I felt that in terms of the future of policing here at The OU, that if we did not win then that would be the end of the story and we would not recruit any more people. The team at the time were on fixed term contracts and those would probably come to an end too. It was a lot of work from the paper submission which takes about four to six weeks to submit and then two further rounds of meeting us in person. I felt the pressure as I could feel the eyes of my team were on me. But with North Yorkshire we really clicked in terms of our values and what they were looking for; they were looking to push boundaries too. They kept saying that they did not just want to do IPLDP in all but name but wanted to do something different and to embrace technology and change their working practices to do that. We’ve worked directly with North Yorkshire and been very much part of that partnership.”

What advice would you give to your replacement?

“I feel happy that I’m handing over something which is in a good place. We have an excellent team and a team that can problem solve. Jenny has been here a while and she has experience with the team, and she is respected – I am happy that she is taking over. We are now coming around to the end of production and have that core PCDA programme.

My advice is to now use this to elevate what we can offer to grow and secure additional partnerships. I think that there is interest from some forces who are not so tied in with the localism agenda and I think that they can see that our offer did not change because of Covid. There is a real attractiveness in the flexibility we [The OU] offer – that we are a big institution, and we can navigate through a storm like Covid and not be negatively impacted; we did not have to pause and delay. We actually launched our PCDA in the middle of Covid and I think that is a real testament to the team and our resilience.”

What sort of impact do you think that there has been of online learning in police education?

“It has not been as quick an impact as I would have hoped. I think that there is still a cultural preference for face-to-face on-site learning, but we are challenging that. There is some historical contention around what ‘e-learning’ is, but we have to keep banging the drum that it is not e-learning but supported blended learning that we offer. The quality of learning that is produced by The OU is something else, and we need to get across the quality of that learning – that is the next challenge. We need to get people to experience it. A typical module at The OU takes 12-18 months to produce before it even gets to students. This is because it goes through several levels of quality assurance and testing. It is not like face-to-face institutions where a lecture is written a couple of days before it is delivered and there is no product per se that a student can take away. We now have all of the PCDA modules using The OU model, so there is a quality product there and it can now quickly be fine-tuned and improved if required.

Whilst I was here I became a new student and did an MBA throughout Covid and that completely changed my mind in terms of the learning experience. I mean we guide the team and talk about the theoretical principles of learning design but it’s only once you’ve been on that other end that you see how it impacts and the learning that is created through our platforms. It blew my mind so I know it would also apply to a policing audience. I really encourage our police partners to try it out – come and see the quality of what has been produced and how it is different to what can be offered by the rest of the sector.”

Where do you see The OU Policing/PCDA going in five years’ time?

“I think that it is here to stay and it’s not going anywhere. There’s always been that big emphasis on standardisation from the College of Policing – so it should not matter if you are doing your PCDA in the North of England or in the South. I don’t think that we’ve got to that point yet, but I do think that The OU is well placed to capitalise on that because we can deliver to scale, and we can deliver to the whole police force. I still think that there’s still space for creativity and learning innovation, but we can continue to influence the sector to move towards that direction in the future. I think we need to push some boundaries and give policing some alternatives. I do not think that the PCDA will look the same in five years’ time.

As The OU we have an obligation as a creative organisation to push partnerships and we could be different and stand out and do it in a different way. I think it is really promising – there are people here at The OU that have been working on the Mars Rover and stuff like that – we can change our technology and the way we design and deliver our learning to policing.”

What are looking forward to most about your move to Australia?

“Professionally I’m looking forward to being involved in a more student facing role. For the last five years I’ve been in a leadership position, and I haven’t been involved with students. I’m looking into how policing is different in Australia compared to the UK and that’s really exciting – to think about how some of the ideas I have had about policing here can translate but also the other way around – what can I learn from Australian policing that maybe will contribute to British debates in policing.

Personally, I’m looking forward to a new culture and exploring a new city. I’m certainly not going to miss the rain!”