The Burundian drum is at a crossroads between heritage and commodification 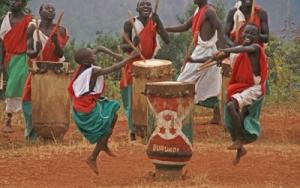 Recent legislation challenges Burundian drums and drumming as a heritage passed down by generations. Restrictions on the who and how of playing these instruments attempts to create a commodity out of a performance with national importance. Instead, people should resist these measures and use drum performances to propagate the country’s cultural richness, showcasing it as an inclusive practice valuable to world heritage.

This blog forms part of the Idjwi Series which results from a writing retreat on Idwji Island in Lake Kivu, DRC during which regional researchers gathered to present and refine their own research in November 2019. The authors are Audace Mbonyingingo, Gérard Birantamije and Constantin Ntiranyibagira. Dr Audace Mbonyingingo holds a PhD in Literature from Moi University, Kenya and is currently teaching at University of Burundi, Institute for Applied Pedagogy where he is Head of the English Department. Dr Gérard Birantamije is a lecturer at the Université du Lac Tanganyika. He holds a PhD in Political and Social Sciences. His research focusses on Security Sector Reform in Burundi and the African Great Lakes Region. He also works on international peacekeeping and peacebuilding policies and his research has been published in the Journal of Eastern African Studies, Routledge, Monkey Cage and African Mind. Constantin Ntiranyibagira is a lecturer at the Kirundi-Kiswahili Department, University of Burundi.

Burundian drums are historically an important part of the heritage transmitted from one generation to the next. They were symbols of power during the monarchy and were beaten for special events to legitimate the king’s power. The monarchy itself was symbolised by the drum Ingoma y’Uburundi – literally, the ‘Kingdom of Burundi’. Since then, the ‘royal ritualistic drum dance’ has become the most prominent aspect of Burundian culture. Drums progressively became instruments of communication in ongoing public policies as well as expressions of nationalism by Burundians living abroad. Many professional groups, mostly from the country’s largest city, Bujumbura, but also in exile and the diaspora, are present at international festivals where they express this part of Burundian culture and identity. Above all, the drums allow them to display pride in belonging to Burundi as a nation. Performances entail spoken word as well as using space, dance, props, spectators and the complex relations between them. Drums necessitate a group of drummers – they cannot be played and performed by a single individual like other traditional musical instruments. As such, since the end of the monarchy, all Burundians, men and women living within and without the country, were permitted to play them. In this manner, Burundian drums have become a public space for expressing freedom. This freedom, however, is being infringed upon by new regulations that restrict who can perform Burundian drums and, ironically, turning this cultural legacy into a commodity.

Presidential Decree No.100/196 of 20 October 2017 limited the use of the drum just when it is increasingly recognised as an intangible heritage of humanity. This law contains two main restrictions. The first one concerns the restriction of the performance, officially to counter its marketisation. Essentially, it entails the codification and penalisation of cultural exhibition. Apart from official events, performances must be authorised by the Ministry of Culture and every team of drummers has to pay US$260 for each performance during a political or social event. Drumming teams residing and performing abroad must pay US$2,000 per exhibition. Failure to adhere to these regulations incurs penalties of US$520 and a six-month suspension. The second restricts drumming to men, discriminating against women who can now only perform folk dances to accompany the drums. These aspects of the decree curtail the expression of Burundian identity, which is unconstitutional according to Article 68 which protects cultural values. Identity is inalienable and dynamic. Thus cultural identity is never complete, always in process, and always constituted within, not outside of, self-representation. Cultural identity cannot be codified. It is collectively assumed as a part of daily life and well-being. Makers of this law used or abused their power to define who can provide and consume this cultural element and where they can do so. At the same time, ‘The Drums of Burundi’ are renown globally and have become akin to a ‘world music’ trademark. Its space and audience are boundless, not confined in physical geography or to certain populations. Audiences are local, regional and international. Social media also plays a tremendous role in the dissemination of drumming, reifying its timeless nature and the inclusivity of its performance and people’s participation. 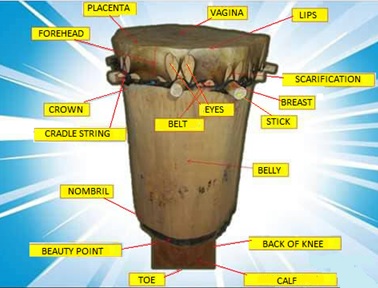 This legal framework also contradicts national and international norms. According to the Burundi Constitution, only a law – and not a presidential decree – can invoke fees, taxes and penalties. At the international level, the Universal Declaration of Human Rights states that every person has the right to freely take part in the cultural life of their community. Burundi has ratified this Declaration and thus has the obligation to respect its provisions. As a presidential decree, this provision remains an administrative measure of local scope. One can imagine its interpretation and application outside of Burundi, where Burundians in the diaspora, or those in exile, play ‘their’ drum. Tensions resulting from this Presidential Decree are already being felt as Burundi drummers living in exile in Rwanda feel discriminated against. A recent performance in Nairobi by drummers created controversies between the Burundian government and the organisers, on the one hand, and between the Burundian government and Burundian supporters of the Himbaza drummers group, on the other. Himbaza participated in East Africa’s Got Talent (EAGT), a competition organised by Clouds Media International FZ LLC. Even though the show was limited to East African Community members, some performers were refugees from South Sudan and Burundi. Rwanda was accused by Burundian officials of having ‘stolen’ this cultural element. Burundian officials and media were up in arms after the performance, claiming that Himbaza had not registered as Burundian. Burundian supporters were equally angry, strengthening Rwandans’ admiration for the group. The incident exacerbated the already tense diplomatic relations between Burundi and Rwanda. Our opinion, however, is that this style of drumming, coupled with elaborate displays (though in regalia that did not reflect the Burundian flag colors), is known as Burundian. The performance shone a light on the cultural diversity of the region and its acceptance of inclusivity.

The decree’s discrimination against women drumming has been less prominent in the national press, despite countering the gender and sex equality provisions of Burundi’s 2018 Constitution. Forbidding women from playing the drum thus stands in contrast to the current period of increasing women’s emancipation in the country. Musicians’ playing of the drum is then ascribed as a sacred ritual reserved only for men, with women allowed to partake in the performances as dancers. Justifications are rooted in understandings that women’s body parts are embodied in the instrument itself (see below image) and so women are already, in a sense, part of the performance.

Thus while the woman is forbidden from beating the drum, she is, in turn, herself socially and culturally ‘beaten’ – struck by the social and economic consequences of the decree. Therefore, if the morphology of the drum resembles in many regards that of a woman, why should they not have the rights to play and perform it? Citizens are the ones left primarily responsible for keeping their culture alive and dynamic by sieving the good from the bad. Commodification of Burundian drums and drumming – entangled with marketisation, penalisation and discrimination – are the decree’s main pitfalls and contain the seeds of its failure. People will resist its implementation: Burundian women and exiled drummers are the country’s cultural ambassadors. In the history of the Burundian drum, some modern drummers (men, women and exiles) have performed in regional and international cultural festivals, not only generating income but also contributing to the continued vitality and dissemination of their culture. The drum performance by the youth outside Burundi, as well as by women, should not be perceived negatively; it constitutes communication that propagates the country’s cultural richness. Read more in the paper, ‘Beating Drums or Beating Women? An Analysis of the Drum Universe in Burundi’ by Audace Mbonyingingo and Constantin Ntiranyibagira. The Idwji Writing Retreat was jointly funded by The Open University’s Strategic Research Area in International Development and Inclusive Innovation and the Centre for Public Authority and International Development (CPAID), LSE.