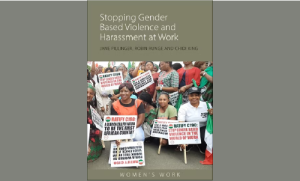 In the first session – chaired by Professor Nicola Yeates – Dr Jane Pillinger, visiting fellow with the Department of Social Policy and Criminology, presented on ‘the global campaign for a global treaty to end gender-based violence in the world of work’. Her talk was based on her new book Stopping gender-based violence and harassment at work. The campaign for an ILO Convention, written by her, Robin Runge and Chidi King, and published by Columbia University Press in 2022.

Her presentation focused on the vital role that trade unions played within the global movement behind the ILO Convention on gender-based violence and harassment at work, and the significance of the convention and the breadth of its definition of the workplace for national and local social actors’ political practices to realise gender equality, as well as for women themselves. Jane’s talk was well attended by staff and postgraduate students and stimulated many questions and much discussion afterwards. We look forward to inviting Jane back at a later date and to hearing about the progress of her other research with Nicola Yeates on Covid-19 deaths among migrant health care workers: risks and responses and through her contributions to the IKD newsletter.

In the second session, we heard findings from three projects carried out by three female researchers at different stages of their career. We started with Sarah Hadfield, who has recently submitted her PhD thesis on Social Policy at the OU, which focused on ‘childfree young women’s experiences of employment insecurity and financial autonomy’. She gave a paper entitled ‘Being an “independent woman”: Accessing Money Under Conditions of Income Insecurity’. Findings discussed where and how young women accessed sources of money and the impact of this on their interpersonal relationships and financial autonomy.

Dr Julia Chukwuma, who recently joined the OU as a lecturer in Economics, discussed her research findings on ‘material culture and norms of healthcare consumption in Nigeria’. In her research, she sought to explore the interplay between the material system of healthcare provision in Nigeria and the prevailing material culture attached to the ‘consumption’ of healthcare. Both these dimensions are impacted by changing narratives and broader global trends such as globalisation, privatisation and the commodification of social services, ultimately impacting who can access healthcare in Nigeria.

Finally, Celia Bartlett (PhD candidate in the Development Policy and Practice at the OU-funded Grand Union doctoral programme) presented her preliminary fieldwork data on ‘political consumerism in a Fairtrade town in the UK’. Celia outlined the debate about the ‘consumer-citizen’ and the tensions inherent in expressions of citizenship via the market.

The role of social policy for both local and global development, the question of time and reproductive work in the family, as well as the role of the state in welfare, were the subjects of interdisciplinary discussions among the participants.