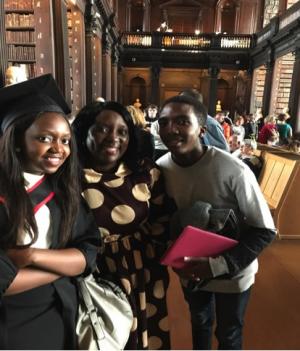 Jesimen Chipika , a research partner in Development, Policy and Practice’s (DPP) very first major research programme, has been appointed as Deputy Governor at the Reserve Bank of Zimbabwe.

DPP began its major first research programme over three decades ago – the focus was food security. It was not long after the Ethiopian famine. Our first developing country partner was the University of Zimbabwe and Jesimen Chipika was the full time Zimbabwean partner. She was completing a PhD at the time on food security in Zimbabwe. One key element of the collaboration was a period she spent at The Open University in the 1990s, together with her family, including two young children. The visit led to her husband, Steve Chipika, taking his PhD with us part-time whilst working with Practical Action Zimbabwe.

Together with Emeritus Professor Gordon Wilson (Steve’s PhD supervisor), I met Jesimen and Steve last week in Harare. After a career as an academic and economic policy maker, with stints at the International Labour Organisation and the United Nations Development Programme, she has recently been appointed as the Deputy Governor of the Bank. At the bank, she can use her knowledge of the real economy to grapple with the aftermath of the 2008 global economic crisis, which followed a major national crisis in Zimbabwe. Jesimen is passionate about financial inclusion and led the production of the Zimbabwe Interim Poverty Reduction Strategy in 2016. She aims to contribute to the re-industrialisation of Zimbabwe and also to export growth. After our meeting, she was en route for the airport for a major meeting of southern African bank governors.

The photo is of Jesimen with two of her children, her daughter Ranga  (graduating as a medical doctor this summer) and Kundi, her son. They were quite a lot smaller when they accompanied their parents to Milton Keynes in the 1990s!