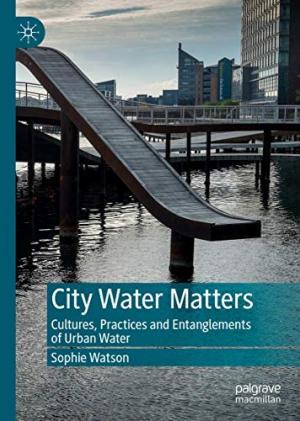 In the wake of World Water Day, Open University Professor Sophie Watson reflects on the unforeseen success of her book exploring how water brings people together.

While most research into water tends to focus on specific issues – typically supply, infrastructure, environment, or sanitation – Professor of Sociology Sophie Watson takes a different and much broader approach.

Her latest book City Water Matters explores the role of water in human, particularly urban, cultures, an absorbing journey that takes in everything from lidos and lightermen to the decline of public toilets.

Although conceived as an ‘academic’ book, it has been widely read by non-academics as well, and ‘has had a much wider impact than I expected’, the author says.

Water is a new topic for her and the book came about through a “very serendipitous” process, she says. “I’ve long been interested in public space in cities and how they allow different people to encounter each other, and I realised a lot of these places are about water, but we don’t think of them like that.”

She began by looking at public open-air swimming areas, then found herself plunging into water’s role in everything from work and religious ritual to consumption, cleanliness and well-being. “I discovered there were so many aspects of water not researched or thought about. At some point, I realised I had a book.

“While each chapter is somewhat independent, there is the same argument running through all – how does the materiality of water enable, produce and reproduce different kinds of cultures?”

A study she conducted with Thames Water reveals significant ethnic and racial differences in water consumption across London; people from the African community, for example, tend to adhere to their customary water-saving practices such as ‘bucket washes’, even though they now have a plentiful water supply.

Her interviews with members of the venerable Company of Watermen and Lightermen of the River Thames highlight the important role rivers have played in cities’ trade and transport, and as sources of employment, and how these have changed over time.

They also serve to highlight, as elsewhere in the book, some of the ways in which we currently fail to appreciate and exploit the potential of the water at our disposal in cities.

“Arguably rivers could do way more for cities than they now do," she says. "They could bring in more freight, replacing polluting trucks, and efficient ferry services could take vehicles off the roads.”

Similarly, public laundries once functioned as important meeting places but their decline and the effective 'privatisation' of clothes-washing has had negative implications for both social life and energy efficiency.

On the positive side, the book charts the increasing use of water features to create new kinds of public space which bring people together.

And the recent publicity given to ‘wild swimming’ suggests a growing appreciation of water’s importance for health and wellbeing.

The book’s aim, she says, is not to argue for specific policies so much as to encourage us to “think about water differently” and stop taking it for granted.

Although much of the book’s source material was gathered in London, across the world issues of water and the environment are becoming increasingly pressing.

Following the book’s success she is hoping to be able to source funding to do a follow-up looking at the same issues from a more international perspective.

“People working in international development are already wise to the importance of water, and how it is the cause of massive migrations. It is probably the most important issue of our time."

City Water Matters: Cultures, Practices and Entanglements of Urban Water, is published by Palgrave Macmillan. It was launched at Parliament Hill Lido with an interview with Professor Les Bach of Goldsmith’s, London University (see here), and featured by Laurie Taylor on the BBC Radio 4 programme Thinking Allowed (listen here)