Creating a stronger and fairer society 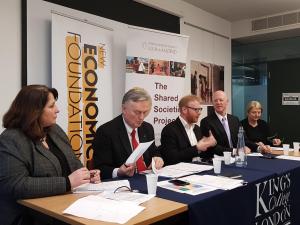 A recent panel discussion organised by Academics Stand Against Poverty (ASAP), and chaired by Professor Helen Yanacopulos, Faculty of Arts & Social Sciences, saw lively debate focused on how to bridge global divides around inequality and injustice to create a better and more inclusive future for everyone.

‘Bridging Our divides: international perspectives on overcoming Social Disintegration’ took place on 19 February and brought together high calibre of members of ASAP, the New Economics Foundation (NEF) and Club de Madrid (which brings together former global leaders to tackle global challenges). The event was attended by over 40 people who shared ideas and experiences addressing the inequalities between rich and poor, young and old, metropolitan and rural, settled and newcomer that are prevalent in many countries around the world. These divisions are driving new and potentially dangerous forms of politics to the fore, and the panel set out to respond to the need for ideas and initiatives that will bridge these divides and create a stronger, fairer society.

Professor Yanacopulos, of The Open University and a member of the Executive Board of ASAP Global, said, “With this panel, we wanted to bring together the right people to discuss ways in which we can not only share experiences and views, but also engage individuals and organisations with the impetus and ability to inspire and effect real practical change. We wanted to explore how the Global South and Global North can work together to challenge injustice and poverty. What we got was a brilliantly passionate and insightful academic debate with real experiences and practical political solutions.”

The panel discussed how a focus on integration is not necessarily helpful and that, instead, diversity in communities is a great asset that should be recognised and utilised. It was proposed that current definitions of prosperity should look beyond economic growth, and look instead at the benefits and value of individuals and vibrant and diverse communities, embracing common shared goals. The panel explored how there is a will among leaders and communities to collaborate and form partnerships in production, shared society and shared environment, but that shared values are crucial to these. Overall, the panel and members of the audience were keen to gather academic expertise and identify and progress steps to create fairer and equal societies. This was the first of many collaborations between ASAP, NEF and Club de Madrid.

Members of the panel were:

Professor Yanacopulos is Head of Department for Development, Policy and Practice at The Open University. She has worked in finance in the corporate and the not-for-profit sectors before returning to complete an MA in Development Studies at the University of East Anglia. Since completing a PhD in Social and Political Sciences at the University of Cambridge in 2000, she has been at The Open University. She has been a consultant for various international organisations, and has acted as Academic Consultant on the BBC productions African School, Syrian School, Comic Relief, the Reith Lectures, as well as the critically acclaimed series ‘Why Poverty?’ and the new 2018 series 'Why Slavery?'. Her research interests bridge the fields of International Politics and International Development and are focused on explanations of how non-state actors influence poverty and inequality. Professor Yanacopulos is a member of Executive Board for Academics Stand Against Poverty (ASAP) Global.

Academics Stand Against Poverty (ASAP) is an international community of scholars and researchers working to confront the rules and practices that perpetuate global poverty and advocate for targeted, evidence-based reforms. In a “post-truth”, “alternative facts” world, never has its work been more important.