The future of co-operation 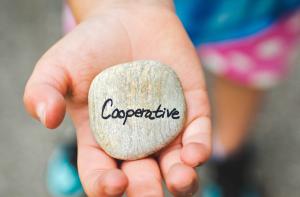 Can co-operatives and associated forms of organisation enable us to think differently about future social and economic organisation of enterprise and services and address key social and economic issues of our time, in the UK/Europe and in global development? What are the possibilities and challenges? A seminar to consider these questions took place at The Open University on 5 December 2018 and included speakers from the Co-operative College in Manchester. The two institutions came together on the eve of the OU’s 50th anniversary and the Co-operative College’s Centenary in 2019.

With more than 1 billion members worldwide, co-operatives are a significant global phenomenon. Originating as formal organisations in the nineteenth century to meet the social and economic needs of low income people, co-operatives, and related forms of association, exist in many sectors: food production, processing and marketing (wholesale and retail); savings, credit, insurance and banking; energy; housing; health and social care; the provision of services of general interest as well as for the disadvantaged; education and creative industries; small and medium enterprises and co-operatives of the self-employed; and digital platforms owned by, and offering services to, online members.

Co-operatives can be worker-owned, consumer-owned and multi-stakeholder. They vary hugely in scale, from large companies to small groups directed to social and economic need. Related forms of organization are encompassed in mutuals; social enterprises have also grown. The many other associated forms of organization that have been set up to meet social and economic need have given rise to an increased interest in the social and solidarity economy.

Co-operatives are defined as: ‘an autonomous association of persons united voluntarily to meet their common economic, social, and cultural needs and aspirations through a jointly-owned and democratically-controlled enterprise’. They are based on the values of self-help, self-responsibility, democracy, equality, equity, and solidarity, and the principles of voluntary and open membership, democratic member control, autonomy and independence, education, training and information, co-operation among co-operatives and a concern for community (ibid). In the UK, there are ‘7,226 independent co-operative…with a combined turnover of £36.1 billion – up more than £800 million on 2017 levels…active members are 13.1 million’ and ‘almost 235,000 people earn their livelihoods directly through co-operatives, largely driven by the Co-operative Group’ (funeral care, insurance and legal services as well as food retail).

There have been many initiatives to promote and support co-operatives in international development, including, for example, the ILO’s Co-opAFRICA and the UN International Year of Co-operatives in 2012 ‘highlighting the contribution of cooperatives to socio-economic development, particularly their impact on poverty reduction, employment generation and social integration’. More recently, there have been actions around co-operatives’ role in supporting the UN Sustainable Development Goals, with the ILO publishing papers on co-operation for each goal.

The seminar was organised in three panels with short presentations and wider discussion. The first panel focused on education; the second on social and economic hardship; and the third reflected on the potential and challenges of co-operation more widely.

You can watch recordings of the three panels below.

The post-event joint report is now available to download

Amanda Benson is Projects and Research Officer at the Co-operative College. Her PhD examined women farmers’ access to resources in India. She has worked in both the UK and overseas in community and international development, gender and agriculture. At the Co-operative College, Amanda works on both international and UK-based projects through research and teaching as well as managing projects.

Alexander Borda-Rodriguez is a Research Fellow in the Strategic Research Area in International Development and Inclusive Innovation at The Open University. Over the last four years his research has been focused on inclusive organisational structures such as co-operatives and related forms of association in Latin America. His PhD (Open University) examined the politics of knowledge for development and development aid in Bolivia.

Sally Hartley gained her PhD at The Open University on Learning for Development through Co-operation: The engagement of youth with co-operatives in Lesotho and Uganda. She has since worked as an independent consultant on youth and development with, amongst other organisations, Restless Development, and is an Associate of the Co-operative College as well as Visiting Research Fellow at the OU.

Hazel Johnson is Professor (Emeritus) in Development Policy and Practice at The Open University. She has interests in collective organisation, social learning and development. With Linda Shaw, she gained an ESRC studentship on youth learning in co-operatives and led a Leverhulme Trust funded research project on co-operative resilience in Malawi. Hazel is a trustee of the Co-operative College, focusing on international development and co-operative higher education.

Fenella Porter is a founding member of the RED Learning Co-op (Research, Education and Development for Social Change). As well as having worked at Ruskin College, Fenella has a long history working with and on women's organisations. Currently Senior Advisor, gender justice and women's rights, at Oxfam GB and a Trustee of Womankind Worldwide, her PhD (Open University) focused on institutional learning on gender equality in international NGOs.

Cilla Ross is Vice-Principal of the Co-operative College and Visiting Research Fellow at the Institute of Place Management, MMU. Her background is in higher and adult education in the UK with a teaching and research focus on the sociology of work and radical and transformational adult education. She is co-editing and co-authoring Reclaiming the university for the public good: experiments and futures in co-operative higher education (with Malcolm Noble, Palgrave).

Alan Thomas previously worked at The Open University in Systems and was a member of the former Co-operatives Research Unit. He then taught and researched international development and development management at the OU before taking up a Chair at Swansea University. After retirement, he worked as Chair of UK City of Sanctuary (2011-2016) and is currently Co-Chair of Swansea City of Sanctuary. He is currently co-editing a third and new edition of Poverty and Development (with Tim Allen).

Nigel Todd is Chair of the Board of Trustees of the Co-operative College. He has a longstanding involvement in adult education and learning as a former WEA Regional Director, Chief Executive of the North East Open College Network, and Co-operative Member Education Officer. He is also centrally involved in environmental issues in Newcastle where he lives (Greening Wingrove) and has a strong interest in the co-operative movement’s engagement in environmental change.

David Wield is Professor of Innovation and Development at the Open University. He was Director of the Edinburgh-OU ESRC Innogen Centre from 2007-2014 and remains a Visiting Professor at Edinburgh. David has extensive experience of working in East and Southern Africa. His interdisciplinary research focuses on: innovation, learning and knowledge in the life sciences, engineering and innovation in developing countries, international research policy and capacity building, and the policy and management of technology.